My Smart Mouth: The Unabomber and respect 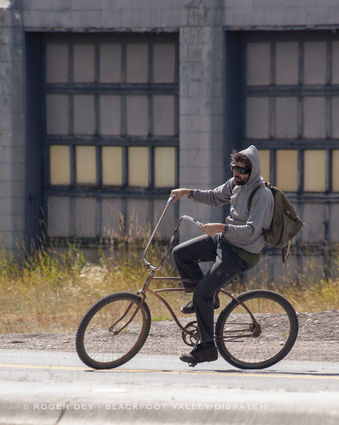 The 2016 20-year anniversary of the capture of the Unabomber, and the recent presence of film crews in Lincoln have prompted a renewed interest and a lot of memories for many of us about that surreal time in our little town's history. Likewise, the resurgence of interest in the case of the serial killer who eluded authorities for more than twenty years, hiding amongst us, has brought up conversation and questions regarding Ted Kaczynski amongst many of my out-of-town friends.

The question that most often intrigues and frustrates me, casting Lincolnites in the role either of oblivious redneck or trusting rube, is the question of just how a destructive and calculating killer could live amongst us for decades without anyone noticing anything "off" about him or suspecting the truth.

Revisiting the memories and accounts of those who found themselves involved in Ted's capture or swept up in the aftermath, what becomes clear is that we did notice – of course we did. In a close-knit community with a population of less than a thousand, it's impossible not to notice the ragged figure avoiding eye-contact in the grocery store or grimly pedaling his bike through a snowstorm. Quite frankly, often in close encounters with Ted, the smell alone was enough to get one's attention.

How, then, was he able to carry out his bombing campaign undetected by locals for so long? To understand the answer to that, I believe one must understand the culture in which we small-town Montanans are steeped – a culture born of Lincoln's early history – which endures to this day.

Lincoln's earliest history as a Caucasian settlement is that of a mining camp that, like countless others of its kind, sprang lawless and rugged out of the surrounding wilderness - as far removed from the stratified and controlled civilization of the Victorian era as it was possible to get.

The settlement founded on mining was soon augmented by the presence of local ranching and timber industry – both professions dependent largely on the toughness, capability and survival instinct of their practitioners.

President Theodore Roosevelt, who himself ran cattle in the Dakotas in the last decades of the nineteenth century, esteemed and popularized the ethos of the American west and those who inhabited it. He described the cowboy as "brave, hospitable, hardy, and adventurous...the grim pioneer of our race; he prepares the way for civilization from before whose face he must himself disappear."

The pioneering spirit of the frontier is often credited as a major contributor to an American culture that, uniquely amongst all cultures, fosters and values independence and self-reliance.

This concept of rugged individualism is most notably alive and well in rural areas in frontier states, where residents continue generationally in agricultural professions, aware of the struggle to preserve their way of life and determined to do so.

Frontiers typically have fewer established institutions or infrastructure, and often occupy harsh environments. Settlers knew they couldn't rely on the pillars of civilization for help or support in the remote reaches of the American west. This truth produced a population high in individualism, fostering values such as uniqueness, toughness and self-reliance and leading to regional cultures which continue to perpetuate such values.

Lincoln, Montana is a prime example of just such a cultural region. Situated remotely, it is notable for the complete lack of local government – regulated, instead, from the county seat in Helena, 60 miles away over a mountain pass. As a result, Lincoln's residents have long governed themselves, largely through cooperation and mutual respect. One result of multiple generations of perceived independence from the strictures and safeguards of the "outside" world is the juxtaposition of individuality and community – a neighborliness and willingness to assist in times of need, tempered by respect for privacy and individual boundaries.

Lincoln has long been a haven for those seeking solitude. The Lincoln of the 1970's -90's, especially, was a haven for the misanthropes and disenfranchised – most notably, Vietnam veterans looking to escape into the wilderness, leaving behind the strictures of a society in which they no longer felt at home.

In short, the time and place fostered an ideal environment for Kacyzinski – a local culture that, while taking note of the unkempt loner in their midst and willing to offer a ride in a snowstorm, respected his desire to distance himself and his right to pedal into the gale. To this disaffected genius, this deeply troubled, resentful and ultimately deadly man, we naturally afforded the basic human decency of respect for his autonomy. Respect for his desired lifestyle, choice of livelihood (or lack thereof) and wish for independence from the very community that provided his safeguard.

Far from being, as we are sometimes portrayed, the oblivious bumpkins who took no notice of our strange neighbor, the residents of Lincoln allowed Ted the one thing he was incapable, in his deadly hubris, of extending to anyone else.