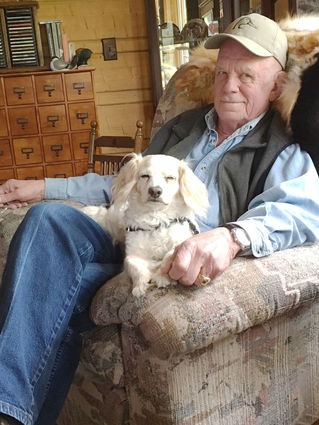 Jim passed away peacefully surrounded by family and close friends at his home in Lincoln on Aug. 24, 2018.

Jim was born in Cincinnati, Ohio on Feb. 22, 1941 to Franklin and Hazel Daugherty. When Jim's father enlisted in the U.S. Navy, he brought the family to California. Growing up, he lived in several cities in central California.

Jim loved golf and in his teenage years caddied and played on Pebble Beach and Spyglass golf courses.

Jim enlisted in the U.S. Navy in April of 1961 and served through January of 1967 as a disbursing clerk in Vietnam, as well as other related ports in that region.

After his Navy service, he returned to California and worked a number of different jobs including bartending, working for a tow truck company, selling janitorial supplies and working for Bowman.

Jim moved his family to Temecula, Calif. He and his wife Wendy founded an industrial fastener company called TamaRand which was named for their two children Tamara and Randall.

After Jim and Wendy's divorce, Jim met Linda in 1985 and they were married in December of 1992.

Continuing as an entrepreneur and the consummate salesman that Jim was, he and Linda formed companies Insupco and Wind Turbine Tools.

Jim and Linda purchased property in Lincoln and, after building their log home, moved in in 2005. They moved their business headquarters to Lincoln and sold their companies in 2011.

Jim always enjoyed his business travels, calling on customers and vendors. Many times he would travel by himself while Linda managed the business activities and the "home front."

Jim and Linda's true passion has been supporting Ducks Unlimited, and Jim held a number of volunteer positions within the organization. He served in the state of Montana as the State Chairman, State Campaign Chair, Public Policy Chair, and was instrumental in Montana DU obtaining the Governor's Moose Tag, which helps to support Montana Fish and Wildlife Service's habitat work. Jim also expanded the Ducks Unlimited Sealed Bid Auction Program in Montana and established well over 70 locations where easels were placed displaying prints, sculptures and decoys to raise money for the organization. He loved running what he called his "trap line," returning with bid slips and calling folks to let them know they were the successful bidder. Due to those efforts, Jim had been recognized on the national level of Ducks Unlimited as the top SBA fundraiser in the country for the last four years.

Jim is predeceased by his parents Franklin and Hazel Daugherty, his brother Jack Daugherty and his sister Pat Ruzicka.

In lieu of flowers, the family requests memorials be made in Jim's name to Ducks Unlimited.