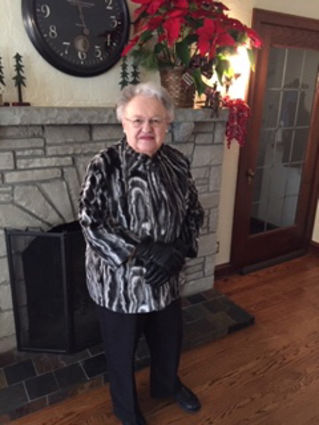 Dorothy Nyleen was born July 21, 1932 in Havre, Mont. She was the daughter of Adolph and Hilda Beck of Hogeland, where Dorothy was raised and showed her many talents early in life. She was raised with three brothers and three sisters. Her traditional farm life helped her secure a strong work ethic, Christian values and the ability to cook, sew and be a star student in school. She left the Big Flat to attend the University of Montana where she met George. On June 21, 1952 she and George were married and her new life began in Lincoln. Mont.

The mountains of Montana provided a successful life for this hard-working couple. Beginning their lives together in Missoula, they soon found the opportunity that Lincoln could offer.

They logged and developed the land but still found time for raising a family of five and being a part of a community where Dorothy became known for her ability to feed anyone from the logging crew to any guest who knocked on their door. She cooked like no other, but many remember her pies and the ease with which she could make them.

Dorothy and George helped build the Lincoln Community United Methodist Church where she played at times for the services, taught Sunday school in the early days as well as provided countless cinnamon rolls, pies and more for potlucks and benefits. She also was an active member of the Pine Grove Home Demonstration Club and helped create the Lincoln Cookbook. As the logging operation slowed and George's health declined, they moved to Helena where she resided until her death, July 11, 2019.

A celebration of Dorothy's life will be held Saturday, Aug. 17, 2019 at the Lincoln

Community United Methodist Church at 11 a.m., with a picnic lunch to follow. Dorothy's ashes will join George at the Old Lincoln Cemetery on that same day.