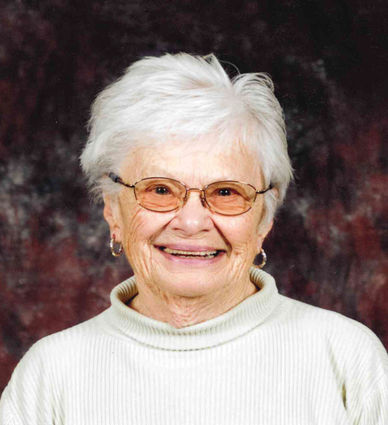 Jean "Beanie" Krautter, 94 of Helena, Mont. and Alpine, Wyo., died at Bee Hive Assisted Living Cottages in Helena of natural causes on Monday, April 20, 2020, with her daughters Connie McCafferty and Gail Asbury at her side.

Jean Isobel Mathews was born in 1926 in Jersey City, NJ to Harold and Jessie Mathews. She graduated from high school in 1944 and went to work at Standard Oil as a secretary. An accomplished musician, Jean played the piano and a 300-year-old pipe organ at her church.

Jean married her high school sweetheart, Don Krautter, after WWII when he was discharged from the Navy (Submarine Service). The couple moved to Michigan where Don attended Northern Michigan Tech, graduating with a degree in Forestry in 1951.

Don was an entrepreneur, starting Aurora Tree Expert Company and Krautter's Garden Center in Fanwood, NJ until they moved to Star Valley, Wyo. in 1973 to farm and develop the Broken Wheel Ranch.

Jean accepted Jesus as her Lord and Savior in 1974 with her daughter Nancy at MSU. Becoming a born-again Christian gave her a new passion to lead others to know Jesus and she taught Sunday School, Awana and VBS at Morning Star Baptist Church in Alpine, Wyo.

"Beanie" was a gentle and sweet lady with many life-long friends who gave her the nickname "The Angel of Alpine." She loved to play and sing hymns and read. People loved her deeply. After her husband died, Jean spent much time in Lincoln with her family and church friends at the Blackfoot Valley Bible Church.

Jean was laid to rest in Christian burial at Amesville Cemetery, Alpine, Wyo. on April 24, in a coffin made by her son-in-law Jim Asbury. The service was officiated by Pastor Art McCafferty and attended by a small group of family and friends due to the pandemic restrictions.