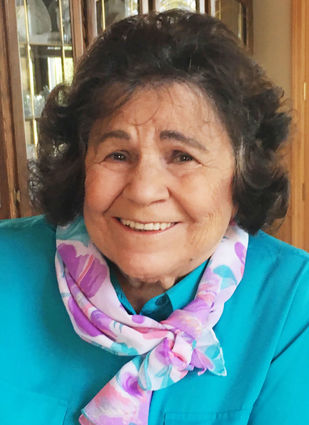 She was born on February 15, 1931, in Fresno, Calif., to Mary (Russell) and Marion Mederios. Early on, she and her four siblings developed a strong work ethic; nothing was given, it was earned. She went to school in Kerman and Los Banos, Calif., before she attended Lyle's School of Beauty in Fresno, Calif. in 1951.

On February 9, 1958, she married a young strapping Army baseball player, Gail Whitworth. Immediately after their honeymoon, they moved from California to Hamilton, Mont. and eventually laid roots in Dillon, Mont. Gail worked for Safeway and became the head coach of Dillon Cubs American Legion Baseball program. She ran a daycare out of their home and worked over the years as a server at Las Carmelitas until she retired.

The two stood side-by-side as they raised five children. After 58 years, on August 2, 2016, Florence held Gail's hand as he passed into eternity. She then moved to Lincoln, Mont. where she lived with her daughter Clarene for the remainder of her life.

Anyone who met Florence instantly knew she was one of a kind. One of her favorite traditions was weekly bingo. Almost always her left shoe was lined with pennies she had found, hoping it would bring her luck.

Her favorite past times included putting a $5 in the Keno machine, planting flowers with her daughters, bargaining at garage/estate sales, putting together puzzles, and playing games.

She was extremely competitive. Among her family, she was known as the greatest card player of all time, especially when it came to "Queenie" and "Pedro".

She always stayed up to date on pop culture, never turned down ice cream, and had the unique gift of making everyone in the room laugh.

Above anything else, she loved her family. She was extremely proud and created unbreakable bonds with her grandchildren and great-grandchildren. She showed her affection by spending quality time together and making her famous potato or macaroni salad, stuffed bell peppers, and "porky pines".

Cremation has taken place and no services will be held at this time. In lieu of flowers, the family requests a donation be made to the Dillon Cubs American Legion Baseball program (P.O. Box 224 Dillion, MT 59725).