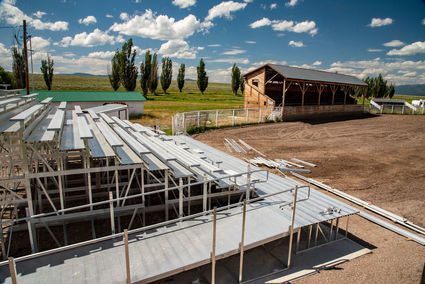 New metal bleachers at the Helmville Rodeo Grounds will provide access for individuals with disabilities, but provide a stark contrast to the historic wooden grandstand.

A new set of metal bleachers will give spectators with disabilities a better experience and increase the number of seats available at the Helmville Rodeo Grounds this year.

Funding for the new seating came from the successful effort to raise funds to save and renovate the historic grandstands at the rodeo grounds in 2017.

"There are so many people who gave to the (grandstand) project, we said if we had money left, our goal was to do ADA seats at the rodeo grounds," said Helmville Rodeo Club President Bill Baker.

The new bleachers replace one of the older metal and wood sets on the south side of the arena, and provides seating for up to 252 people in addition to the five ADA-compliant wheel chair spaces.

The excess money from the grandstand fundraising project wasn't limited to just the rodeo grounds. It also funded the installation of a wheelchair lift for the stage in the Helmville Community Center as a service for the community.

"We were able to swing it," Baker said, adding that all the labor for both projects was donated.

The installation of the new stands has taken about a month. Baker said they poured the concrete foundation for them in June, and still had some final work to do to install railings and fencing around the new stands, which features a ramp and an extra wide deck to accommodate wheelchairs.

Baker said they may invest in a cover to help shield the metal from the sun at some point. "They might get hot, but if you fill it up with people they won't," he said.

The old bleachers aren't headed for the junkpile though. Since they are collapsible, the club just folded them and moved them to the other side of the arena, with plans to put them back out for additional seating, once they figure out where everything will go.

The new bleachers will change some of the dynamics during the rodeo. Notably, the ambulance, which in the past staged on the south end of the rodeo grounds will now have to come in through the north gate, next to the roping chutes.

Baker noted that the Helmville Rodeo Grounds saw some other upgrades last year as well, when the rodeo club used funds unrelated to the grandstand to install new roping boxes and calf chutes at the north end of the arena.

The grandstand renovation, box upgrades and new roping chutes earned the club recognition from the Northern Rodeo Association for the Most Improved Facility of 2019. The annual Helmville Labor Day Rodeo also received the NRA's Gold Rodeo of the Year award.

Looking ahead, Baker said plans for the Labor Day rodeo are still moving forward, but he has some reservations, given the current COVID-19 situation.

He said the Helmville Rodeo Club is discussing ideas for how to do things differently this year, if they can move ahead.

"It's a lot more work." he said. Baker explained that they are considering limiting seating, and the possible use of fencing to control the number of people who can enter the bleachers and grandstands. Temperature checks and a recommendation that spectators wear masks are also being discussed.

Currently, Powell county is one of just six counties in the state that have no recorded cases of COVID-19. 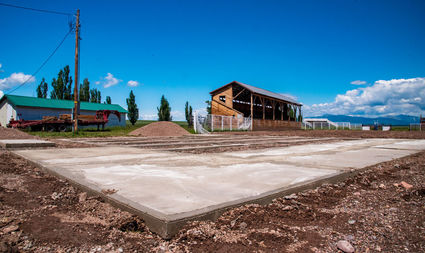 The foundation for the new bleachers in June.