Lincoln School gets taste of politics

Students tune in to campaign, take part in mock election 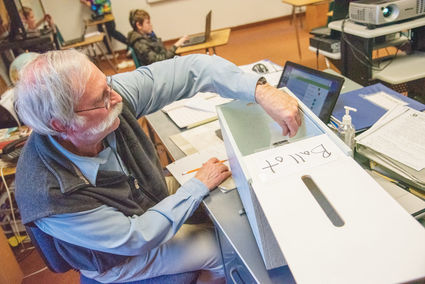 There is a lot of controversy swirling around the Presidential election at the national level, despite media outlets declaring Joe Biden the winner, but at Lincoln School, Donald Trump was the clear choice among students, taking 55 votes to Joe Biden's nine.

Republicans also swept the school's "down ballot" races, with Greg Gianforte, the favorite for the governorship with 41 votes to Mike Cooney's 15 and Matt Rosendale besting Kathleen Williams among the students 42-14 for the state's sole House seat. The tightest race saw Steve Daines beating Steve Bullock by just three votes.

"I feel like it's good practice to have," she said. "It's a really important exercise to use when you're older, to have a voice, even when you are just 18, because it makes a difference for America and you can do that."

"I want everyone from an early age starting to know that our system demands involvement if you want to have your voice heard," Roberson said as he counted ballots last week. "What we're hoping to do is have the kids see that voting does matter and that they really need to get involved in those types of things."

He expected many of his students to watch the presidential election last week, based on their interestin the process. "A lot of the students watched the debates. I'm really proud of these kids. A lot of them are really into this. That's very promising."

Roberson said he talks a lot of politics since it an election year, particularly in his Government classes. As a teacher, he said the uniqueness of this election has provided both challenges and opportunities.

"I myself, sometimes get disappointed. I think over several of the last elections, we haven't always had the best of candidates. I think a lot of that has to do with so many Americans who just aren't involved in the political effort and being heard and so on," Roberson said. He hopes people will get more involved and keep up with what's going on and where the candidates stand, so over time the country gets better candidates.

The presidential campaign clearly left an impression on some students.

"It's been a pretty ugly Gary election honestly," said senior Joey Wiederhold. "That first debate was horrible. I started watching at the end when they started to calm down, but it was pretty bad."

He felt the Vice-Presidential debate was quite a bit better. "It was more calm, it was more respectful. I think both presidential candidates learned from that one."

"I felt like its either going to be really close or really far apart," said 7th Grader McKenna Copenhaver's prediction of the election outcome. "I do like to watch the debates and stuff because it's really funny watching them argue, and it can be very fun to know about what they're trying to do with all the COVID stuff and the actions they're trying to take. I think it can be very interesting, but sometimes it can be very boring or very confusing, with the electoral votes."

Of course, the Electoral College, which has been a subject of debate in recent years, has also been a part of the discussion in Roberson's high school classes. 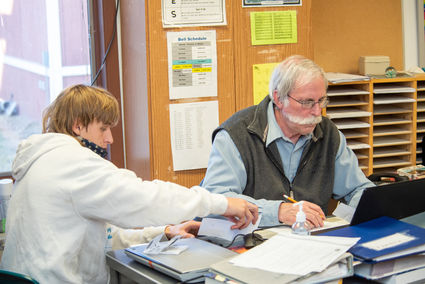 "I don't know the numbers, but there are a lot of people who think ''it's kind of an outdated system. But there are people who feel just as strongly, for reasons that the founding fathers did- they still like the electoral system," he said. "Of course, this is the only election we're dealing with today that isn't a popular vote. We've talked quite a bit about it. For the most part, most of the students kind of see the electoral system as kind of a confusing mess and don't really understand why we don't just do a popular vote."