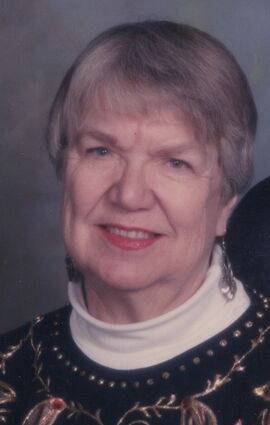 Helen Christine ("Chris") McInally of Lincoln, who taught music to students in Lincoln and throughout Montana for more than 50 years, died of natural causes Tuesday, June 29, in St. Patrick Hospital in Missoula. She was 89.

She was born on May 15, 1932 in Los Angeles to Charles and Helen Fox. Charles served in the U.S. Navy , so the family lived in places such as Coronado, California and Groton, Connecticut. She graduated in 1950 from Coronado High School, where she was in the Honor Society and served as the features editor for the school newspaper. After Charles left the Navy, the family moved to Great Falls, Montana, where he worked setting type for the Great Falls Tribune.

In Montana, Chris started a teaching career that began with a stint at a one-room school in Eagle Butte, a farming community between Fort Benton and Geraldine.

In 1954, Chris met Richard McInally, who was on two weeks' leave from his Navy post in Corpus Christi, Texas. They were married on Dec. 23, 1954. Christine moved to Corpus Christi after finishing the school year at Eagle Butte; the two eventually moved to Pensacola, Florida and then Montana, where they lived in Glasgow and Great Falls. They moved to Lincoln in 1992 to be close to her parents.

Chris studied music at San Diego State University and received a bachelor's degree from the College of Great Falls. Years later, she participated in a master's program in fine arts at the University of Montana. She taught music in schools in Vaughn and Lincoln, in addition to offering private music lessons to students in Great Falls and Lincoln for more than half a century.

She was an indefatigable volunteer in Lincoln for years, organizing community concerts with choral groups and other events. While she was in her 80s, she performed a recital in the teepee burner of Lincoln's Sculpture in the Wild; former students joined her on some of the songs.

In 2011, Chris won an Outstanding Community Service Award from the Lincoln Valley Chamber of Commerce for her years of service, and one personal campaign in particular: After years of volunteering as a crossing guard outside Lincoln School, she became frustrated by the number of drivers on Highway 200 who would not slow down despite her signals. So she launched an effort to establish a reduced-speed zone near the school, a campaign that eventually required legislative action. She attended the ceremony at which Gov. Steve Bullock signed the legislation.

She was preceded in death by her father, Charles, and her mother, Helen; two aunts, Hester Dale; Christine Lundwall; and an uncle, Hal Lundwall.

A celebration of life will be held in Lincoln later this summer.

Cremation services were handled by Garden City Funeral Home and Crematory in Missoula.