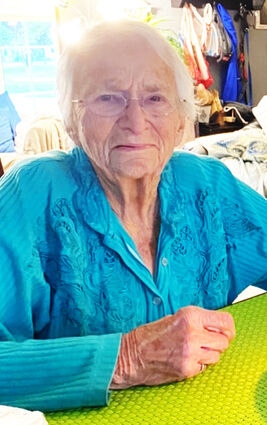 Jesse Frances Sallin, 89, passed away on Nov. 7, 2021 at home with her family by her side. Mom was born at home on Sept. 19, 1932 in Shelby, Mont. to parents Dan and Leona Dobyns. Rumor has it she was the first two-year-old who could knit her own baby clothes.

She grew up in Shelby down by the Marias River in a stone house her dad built. After the house flooded twice in one year, they upgraded to a large canvas tent while her dad built a new house.

Mom attended the school in Dunkirk as well as St. Thomas in Great Falls. Her time at St. Thomas gave her some great stories of mischief that she would recount up till the end – like stealing ice cream from the nuns and when she snuck out and got arrested, spending the night in jail with her friend (...then getting eggs the next morning for breakfast!)

She met our dad, Bill Sallin, in the summer of 1950, and they married three months later on the day after she turned 18 and moved to Great Falls. She decided getting married and having babies was more important than finishing school. This was ironic, given she was a firm believer in education and often volunteered to help her favorite Lincoln school teacher, Kris. She loved having Kris's second graders read to her and helping the class with holiday cookie plates.

Mom and Dad's first daughter, Kathy, was born in 1951. Mom wanted more babies but it took her 18 years to get pregnant again. During those years, she finally learned to drive and got her first driver's license when she was 38. Over the next 50 years she made up for lost time by driving over a million miles in her three compact Hondas.

Unfortunately, mom's next baby was stillborn in July 1969. Less than a year later, she learned of a baby who needed to be adopted. Mom and Dad adopted her without hesitation when she was just three days old. They named her Jill. At that time, Mom was actually two months pregnant but didn't tell anyone...she would have had 20 kids if it was up to her. Her son Bill was born later that same year. Her last son, Josh, came three years later – the day before mom turned 41. (The best birthday present of all!) She loved being both a Mom and a Grandma - and we couldn't have asked for a better one. They started building on property in Lincoln in 1963 and moved the whole family in 1975.

Mom's passion was making homemade crafts and, boy, did she do it all: crocheting, knitting, quilting and sewing. She was the epitome of the saying "idle hands are the devil's playthings," as that lady just couldn't sit still. She even asked for her knitting when she was in the hospital, so she could stay busy. She LOVED selling her creations at craft shows, which she did through the summer of 2021. She truly enjoyed seeing all the people at the shows and what other people were selling. She also loved to dance and would go to Great Falls often on the weekends to see if she could find a dancing partner.

She lived a great life and enjoyed traveling. Mom made a couple of trips to Europe, including a family trip to Ireland, and motored around the United States in her car. She was very active in the community of Lincoln, helping organize the annual parade, helping at the school and getting a group of ladies together to sew twice a week (which was the highlight of her week). She was even named Volunteer of the Year in 2016. She helped start Lincoln's annual Flea Market, the Lincoln Clothing Giveaway, and the Halloween Carnival (1983), in addition to donating dozens of handmade quilts for local organizations.

She is survived by daughter Kathy (Howard) and granddaughter Kate; daughter Jill and grandsons Zach and William; and son Josh (Sara) and grandson Kellan. She also has three great-grandkids (Enna, James, and Autumn).

Cremation has taken place and there will be a private service at Dunkirk Cemetery later next year. A celebration of life will be held Saturday, July 16, 2022 during the annual Flea Market at Hooper Park. In lieu of flowers, please consider making a donation in her name to the Lincoln Volunteer Ambulance, PO Box 455.

Thank you, mom, for all your love and support and for giving us the best life possible. You will be missed by everyone who met you.