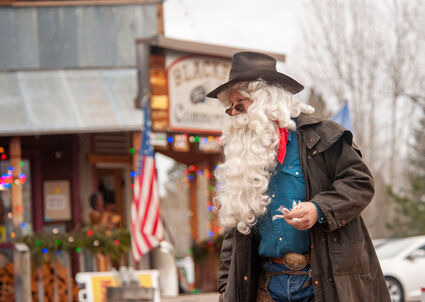 Cowboy Claus takes a break from visiting with kids at the Brand Bar Museum to deliver some candy canes to kids at the petting zoo.

It might not have been cold and snowy in Ovando last Friday, but Christmas was in the air as the Old West Christmas Fest brought scores of people to town.

As with so, so many events in 2020, concerns about the lingering COVID-19 pandemic prompted organizers to scrap the annual festival last year, with hopes for better luck in 2021.

And better luck they had, despite some scaling back.

"My big thing is I want to make sure everyone knows it's kind of a building year after COVID," said organizer Leigh Ann Valiton. "We were missing a few of the things we normally have. Hopefully next year will have a few more things downtown. We just didn't want to let it go one more year, so we did what we could. I think it did turn out pretty well."

Christmas Fest this year featured enduring favorites like the return of Cowboy Claus (who must have been impatient to return since he showed up earlier than expected), the petting zoo, gingerbread houses and a craft sale at the school, a few things were missing

"The back country demonstration tent wasn't there. Also (we) didn't have burritos for sale – they were out of town and weren't able to be there, and we haven't had the axe throwing," Valiton said.

They also skipped the cooking contest this year, given some lingering concerns about COVID.

Valiton expects to see those things return next year and hopes to have a few more games and things available for kids while they wait for Cowboy Claus.

Nevertheless, families found other ways to keep themselves entertained this year while they waited for the bearded old gent to make his way to the Brand Bar Museum. Ovando Historical Society President Barb McNally said things started out fairly early with people coming into the museum. "Small family groups just taking their time to tour the museum and look at stuff," she said. "They had great fun trying on the hats and photo ops with the hats on."

In fact, this year may have set a record for the number of kids who showed up to share their Christmas wishes with Cowboy Claus

"I think it was as much, if not more than we've had in a lot of years," said McNally. "The line was clear outside and just kept going."

Valiton said Cowboy Claus handed out 68 candy canes to kids Friday, the most he can ever remember. 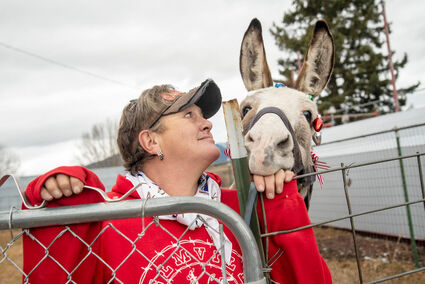 "A lot of them were first timers. They didn't know we did this," said Terry Sheppard, who was helping McNally at the museum. "Some were from Missoula, or they'd moved into the area."

Valiton said the craft sale also went well. "I had a lot of vendors there and a lot of interest for next year," she said.

The sale also featured some new faces, which helped keep it fresh and different from the Helmville craft bazaar.

"I really just think it went well for the kind of year that it was, a rebuilding year," she said.

Despite COVID-19 still having an impact this year, following the arrival Delta variant late in the summer, Valiton said they didn't hear any concerns about it. "People were really happy we were doing it," she said. "There were a few people with masks, which was good if they felt comfortable in doing so. I didn't hear any push back at all. It's a little bit closer to being normal again.