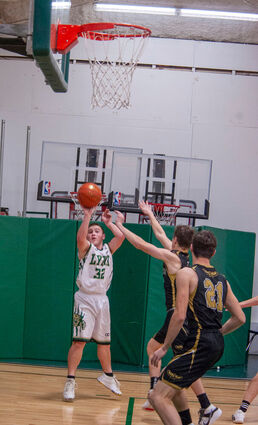 Logan Joyce takes advantage of a clear shot to put two points on the board.

The Blackhawk express from Seeley Lake thundered through Lincoln on the Friday before Christmas break and it wasn't bringing gifts from the North Pole.

Both teams, the Lady Lynx and varsity men, fell to the perennial powerhouse Seeley Lake Blackhawks in lopsided losses that were tests of character and resiliency.

The Lynx men suited up six players which gave Coach Shane Brown a lonely bench of one to rotate his tired team. The Blackhawks had seven on their bench or one and a half fresh teams to replace starters who only played the first half anyway.

Compounding Lynx difficulties were cold shooting and picked off passes. The top Seeley scoring men, all seniors, averaged six-feet, two-inches in altitude and played a very physical game. The young Lincoln players, not used to "body slam basketball," will have to acquire this advanced skill usually reserved for older, heavier players. 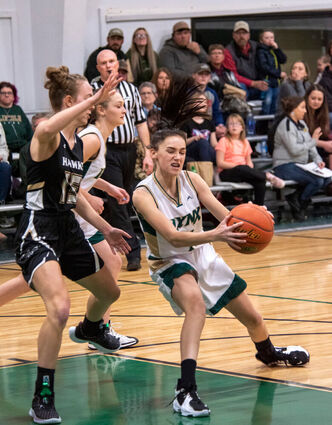 Eighth grader Makena Copenhaver wears her game face as she looks for an opening in the Seeley defense.

Top scorer for the Lynx was freshman Andrew Brown who tallied 14 and shot 78 percent from the free throw line. Logan Joyce, a sophomore who likes football and contact sports, muscled his way to nine points.

The Lady Lynx put six high school players and one eighth grader on to the court to face the swarm of Lady Blackhawks but cold shooting also hampered the hometown gals.

One amazing stat was the four rebounds of Senior Jenna Templeton, the five-foot, four-inch dynamo for the Lady Lynx who grabbed the ball away from opponents five inches taller than she.

Templeton and Jessica Zarske tied for high honors with seven points each, and Makena Copenhaver had a fiercely pounded blocked shot to her credit, illustrating everyone's frustration with this night.