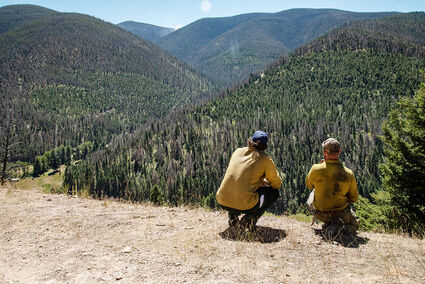 Commissioner Jim McCormick asked Lincoln Fire Chief Zach Muse for an update on the fire department and fire season. Muse said everything is going well and the Lincoln Volunteer Fire rescue has been pushing hard on their wildland fire training

"We're green right now," he said. "May and June are our wettest months for rain. In May we had 1.4 inches, which really isn't that much. But it was cool, so that helped."

He said Lincoln averages five to six inches in June, and the amount of rain in June is the best indicator of fire season.

By June 13, Lincoln had seen nearly three inches of precipitation

Lincoln District Ranger Rob Gump agreed that May and June are the wet months in the Northern Rockies and though he hasn't talked to his fire fuel's person, he believes Fuel moistures are probably right where they should be. However, he also said in 2017 the weather was looking good, but that changed quickly.

"It was like someone turned on an oven switch and we had one of our worst fire seasons in the northern Rockies since I think about 1910. So, we'll just have to see how it all plays out."

His cautious tone echoes that of past district rangers, one of whom believed the best time say how a fire season will go is after it's over.

Gump noted that conditions to the east of us are in a lot more drought conditions. He said while we only saw about four fires in the area last year, "I think we're expecting our card to be played this year. You always go in being prepared; I'm glad you guys are doing the same."