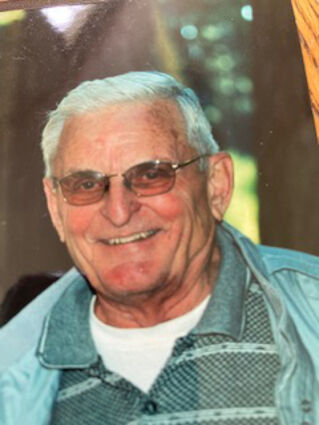 William Wesley "Wes" Eyer age 89, of Glendive, Lincoln, and Montana City passed away Tuesday May 31 in the company of family.

We would like to say Wes passed away peacefully surrounded by family, but as Wes would have it, he spent his last hours pestering the staff and marveling at the wonderful people and experiences he was blessed with.

Wes was born on April 26, 1933, in Glendive to Claude W. and Marguerite (Adams) Eyer. Wes was the first of three children. He was joined by sisters Joan and Sally to make the family complete. Wes was educated in Glendive attending Lincoln Elementary School followed by graduation from Dawson County High School in 1951. Following his graduation Wes attended Montana State College (MSU) for three and a half years before pre-empting the Army draft by enlisting. Wes served with the 8th Army Band and spent a grueling two years touring Europe and seeing ALL the sites.

Wes returned to Montana State College upon his honorable discharge from the Army and graduated with a Bachelor of Science degree in Mechanical Engineering in 1959. Wes then moved back to Glendive and began a 34-year career with MDU P&T Division, which is now known as WBI Energy. Wes acquired the nickname of "Web Foot" as his first several natural gas wells he directed to be drilled only found salt water. Wes described his career as spending 34 years "passing gas". Wes ended his career as the manager of WBI Operations. Upon retirement Wes and June spent the next several years honorably providing care for aging parents. To stay busy Wes and June volunteered to lead the automation of the Glendive Public Library.

Wes met the love of his life when he began dating June Hoth in 1961. They were joined in marriage in 1962 in a double wedding in Scranton, North Dakota, June's hometown. The couple then made their home in Glendive. In 1963 son T. J. was born and joined by Wendee Ann in 1967. The family enjoyed many days camping and boating at Fort Peck Reservoir and fishing in the many lakes and streams of the Cooke City and Yellowstone Park area. One of Wes' favorite times was on the 'River Trip" (two weeks "boating" on the Missouri River from Fort Benton to the Dam at Fort Peck) with many great friends. After retirement Wes and June purchased a 5th Wheel and spent the summers touring much of the United States, finally ending up spending their winters in the Pensacola, Fla. area and summers in Lincoln, Mont.

Wes was an active member of the Glendive community serving on the Dawson County High School Board, Dawson Community College Board serving six years as chairman, a member of the Elks Lodge and Masonic Lodge of Glendive. Wes was also called to serve the State of Montana as a member of the State Chamber of Commerce Board and the Governor's Council on State Government Management. Wes was recognized by Governor Stan Stevens for his service with a signed original painting of Wes' beloved Missouri River White Cliffs.

Throughout his life Wes always found the positive in everyone. Wes loved to talk and tell his much-repeated stories and share his enjoyment of life with everyone, as his many friends can attest. Wes loved life and shared that love in everything he did. Wes was also a wise counsel for many who just needed a little encouragement and a reminder that they were better than they thought. We all loved him very much!

Wes was preceded in death by his parents Claude and Sue, his mother- and father-in-law Richard and Ester Hoth, and his beloved daughter Wendee.

Wes and his family would like to invite you to come and share a "Miller Lite on Wes", Friday June 17, 2022, at 3 p.m. at the Stoney Brook Recreation Center in Montana City. This get together will be a true celebration of a life well LIVED!

Memorials to can be made to Dawson Community College Foundation at dawsoncollegefoundation.org