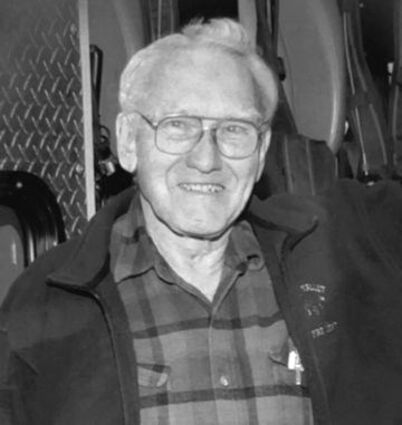 Dean Darrel Mack, 90, beloved father and grandfather, began his eternal heavenly journey when he transitioned peacefully from his earthy life the evening of Jan. 21, 2022, surrounded by his family.

Dean, the oldest of 3 sons, was born in Hazen, ND, on April 14, 1931, to John and Marie (Bubel) Mack. The family lived on the family farm in the neighboring community of Zap. Dean attended elementary school in Zap until the family moved to Lincoln, Montana. He attended junior and high school in Helena and was graduated from Helena High School in 1949.

Following high school, Dean's first jobs were in communications. He helped install the microphones, speakers, and voting system in the House Chamber of the Montana State Capitol. He hosted a radio program called "Mack's Ranch" on the KCAP country radio station. At the radio station, he met and interviewed many famous country singers of the time. He recalled hosting Hank Williams Sr.'s band after their performance and "showing them a good time" around Helena.

He started his career with Mountain Bell Telephone Company in the mid-1950s in Helena before being transferred to Rawlins, WY. In Rawlins, he met the love of his life, Evangeline Contos. They married on Sept. 28, 1957. Dean and "Vangie" were blessed with four children-a daughter and three sons. In 1967, Dean accepted a job transfer to Denver, and the family moved to North Glenn, CO. In December 1968, Dean had the opportunity to move the family to Montana when he accepted a position with Mountain Bell in Helena. They built their family home-from framing to finish-in the Helena Valley, raised their family, and Dean resided there until he passed.

Dean was active in the Helena community. He participated in Toastmasters and was an active member of the AFL-CIO labor union. He was a charter member and trustee of the East Valley Volunteer Fire Department for more than 20 years. After retiring from EVVFD, he continued to fight wildfires for the DNRC. He passed the DNRC "pack test" annually until he decided to fully retire at age 78. He was a school board trustee for School District #3 and later for District #1. He was a parish council member when Our Lady of the Valley Catholic Church (OLV) formed in 1977. He served as a lector and lector instructor for over 40 years. He was a long-standing member of the local chapter of the Telephone Pioneers and the Upper Blackfoot Valley Historical Society in Lincoln, MT.

He loved his family and friends and was especially proud of his grandchildren. He enjoyed spending time with his family at the cabin on Flesher Pass, boating on Hauser Lake, and enjoying many family vacations and large holiday and birthday gatherings. Everyone who knew Dean Mack knew about his garden. Every summer, he spent hours each day tending to his garden and enjoyed sharing his produce.

Dean is survived by his children, Marina, Jim, Dean, and Spiro (Connie); his grandchildren Kimberly Little, Stephanie (Michael) Marsac, Anthony "A.J." Little, Christopher and Caleb Murray; his great-grandchildren Kane and Gauge Murray; his dog Cricket and cat Jasper. He is also survived by his brother Brian (Jo Anne) Mack; family friends Aaron Grossman, Eric Wiley, and Mike Cuta; and the extended families of his wife's and brothers' spouses, children, and their families. He is preceded in death by his wife Vangie of 57 years; his parents John and Marie; his brother and sister-in-law Eugene and Lois Mack; and numerous family pets, especially fond to him were Suzi and Nala.

The family gratefully thanks the medical floor doctors, nurses, and staff at St. Peter's Health who provided exceptional care, compassion, and medical assistance to Dean while he was in their care. You are all angels on earth!

Friends who wish to contribute a memorial in Dean's honor are invited to share with the Lewis and Clark Humane Society. Please visit http://www.aswfuneralhome.com to offer condolences to the family or to share a memory of Dean.

We love you, Gpa, and will dearly miss you! We raise a toast of Mogen David Concord Grape wine in your memory. Quoting a dear friend: "Heaven doesn't know what's hit it!"