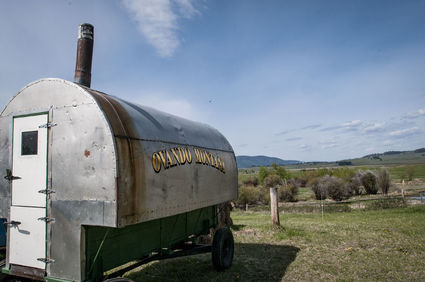 The small, rural community of Ovando went head to head with the cities of Helena and Butte and came out on top as it was named Montana's 2018 Community of the Year.

Ovando earned recognition for its "commitment to the promotion and development of tourism in Montana" in large part due to its international reputation as a bicycle-friendly community.

Adventure Cycling of Missoula nominated the town for the award based on its reputation for hospitality and for its unique amenities for cyclists and hikers, such as the town's Teepee, Sheep Wagon and it's historic jail, dubbed "The Hoosegow," all of which are available for a nights stay. Ovando's Blackfoot Angler Fly shop serves as both a supply point for bike parts and as an information hub, with a message board for cyclists.

Ovando began establishing itself as a cycle-friendly community several years ago when residents went out of their way to help riders on the annual Tour Divide Mountain Bike Race from Banff, Alberta to Antelope WellsN.M. Since then bicyclists from around the world who cross Montana heading east or west along Highway 200 or north or south along the Great Divide Mountain Bike Route have made Ovando a travel destination.

Word of the win spread through Facebook posts Monday night, shortly after the award was announced at the Montana Tourism Awards Banquet at the Governor's Conference on Tourism and Recreation in Big Sky. Leigh Ann Valiton posted an image of the town's award, saying "Wow! We are so thrilled."

In sharing the image, Blackfoot Angler owner Kathy Shoendoerfer added that "Thrilled is an understatement!"