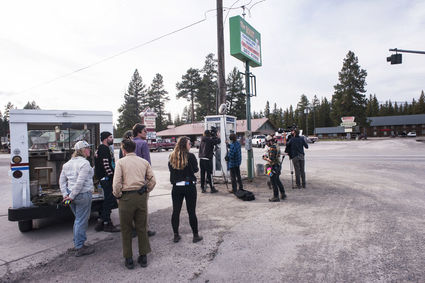 The "Ted K" crew films a scene at the corner of Stemple Pass Road and Highway 200 featuring a phonebooth set up in the spot where one stood for many years. It was often used by Ted Kaczynski, who was known for complaining it ate his dime. Although the crew located the original phone booth, it was in poor condition. Producer Matt Flanders also noted, half-jokingly, that they weren't sure people would believe such an old rotary dial pay phone was still in use in 1996.

Last Thursday afternoon, a phone booth re-appeared on the corner of Highway 200 and Stemple Pass Road, in the same spot where one once stood for years.

Although the booth differed from the original – some recalled it having red accents rather than blue – it served as the setting for a scene in the independent film "Ted K" currently being filmed in and around Lincoln.