Bob Marshall Wildernesses Open a test of skill, endurance and self 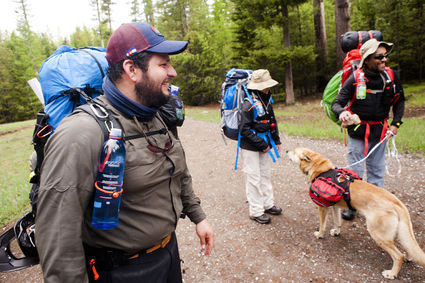 Abel Estaban, Karen and Lou Acosta and their dog Kalope get ready to head into The Bob.

Crossing the Bob Marshall Wilderness Complex over the Memorial Day weekend may seem like a bad idea, but for a small group of ultralight backpackers the challenges it presents is the very reason to go.

The Bob Marshall Wilderness Open got its start in 2012 when Dave Chenault, a social worker who evaluates and writes about lightweight backpack equipment. According to his website, Bedrocks and Paradox, Chenault has a history in both wilderness area traverses and ultra-endurance mountain biking. He founded the Bob Marshall Wilderness Open in the tradition of the Alaska Mountain Wilderness Classic, which requires participants to be completely self-contained and leave no trace as they make their way across a wilderness area.

Each year the start point and the end points change. This year's Open was slated to begin at the Indian Meadows Trailhead northeast of Lincoln, but the deep late season snow prompted Chenault to shift it to the North Fork Trailhead. The end point this year is Marias Pass. The route between the two points is up to the participants.

"Everybody's route seems obvious to them, but everybody's taking a different route for the most part," said Dan Mintner of South Bend, Ind.

Minter participated in the Open last year but opted out this year, when his hiking partner pulled out with a hip injury. Nevertheless, he was on hand Saturday morning. May 26, to see this year's group of about 20 backpackers off as they headed up the Hobnail Tom Trail and into the wilderness.

"The route this year runs about 140 miles. It's typically close to 110, somewhere in that ballpark. It's quite a bit longer this year," he said.

While there tends to be a competitive nature to the folks who take part in the BMWO, Mintner said it's not really a race.

"There's no sign up, there's no fee, there are no t-shirts. Just go up and run your hike," he said. "It's mostly a lot of good camaraderie. The same guys coming back. This year we've got guys coming from all over; Michigan, Indiana, the Dakotas, Canada."

The reason for holding the event on Memorial Day weekend stems from the very conditions that hold most people back, Mintner explained. "That's when the conditions are the worst. Deep snow still in a lot of paces, lot of snowshoeing, high-water, hungry bears roaming around. That's why we do it now. We want it to be a true wilderness experience," he said. "This year looks like it will be a great year, with the exception of the high water. High water is a big safety concern."

He said the hikers are also expecting to run into more deadfall than usual following last winter's heavy wet snow.

Although Mintner said most of the participants have a lot of experience in the wilderness and with ultralight backpacking - with the most dedicated covering the route in less than three days- Abel Estaban was an exception when he tackled last year's BMWO for the first time, despite having "no experience at all."

Estaban, who's originally from Mexico but now lives in Colorado, said his wife was reading blog posts and saw that many of the people who had plenty of wilderness experience considered it to be a "pinnacle experience" for them.

"She was very concerned because I had zero experience doing these kinds of things," he said. "And it's true; the people here, they have a lot of experience. It's a very good outdoor activity." 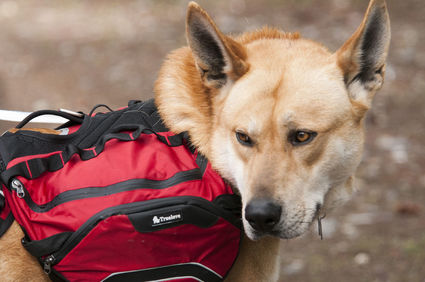 The Acosta's dog Kalope - which means strong- waits to leave.

When asked why he did it, he joked that it might be due to masochism, but said he learned a lot in his first three days in the wilderness last year.

This year, Estaban introduced the BMWO to fellow newcomers Lou Acosta and Acosta's 16-year-old daughter Karen who, along with their dog Kalope, joined him from Michigan. With packs in the 45-pound range, they traveled heavier than most of the others. Mintner said BMWO participants consider a 25-pound pack to be on the heavy side.

However, Estaban and his small group, who

had given themselves seven days to make the trip, seemed more interested in the Bob Marshall Wilderness Open as a sort of journey of self-discovery, rather than as a race.

"It's a very good way to know yourself," Estaban said. "This is a summary of, how is life?"