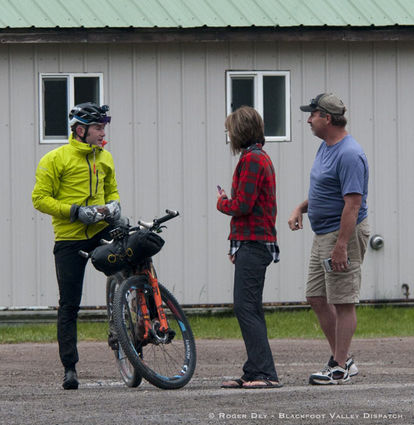 Historically, Lincoln hasn't had a great reputation among bicyclists.

In a 2013 University of Montana analysis of bicycle tourism in Montana, Lincoln was one of just a few towns in the state singled out for its unwelcoming attitude. One cyclist interviewed for the study said, "It is my opinion that the cowboys in that area would shoot us as look at us."

As a community that sits at the crossroads of the Great Divide Mountain Bike Route and the major east-west route for touring road cyclists that is Highway 200, that's not the reputation that Wheel Inn owner Laurie Richards thinks Lincoln needs. This year she's making a personal effort to change that.

"I want to change people's minds. We don't want negative connected to Lincoln," she said. "We have a great town and we need to ... welcome them."

Richards, a lifelong resident of Lincoln, admitted that until just a few years ago she hadn't given much thought to either the cyclists or the hikers who come through town every year. That began to change thanks to her son Bryce Daniel, who took up mountain biking several years ago and developed an interest in the Tour Divide. Daniel is riding in the full Tour Divide from Banff to Antelope Wells N.M. for the first time this year.

"When Bryce, a few years ago, decided to do from Banff to here, the people he met and the stories he heard helped to give me a new perspective on the people who come through on the trails," Richards said.

Her work on seeing Lincoln designated as Montana's first Continental Divide Trail Gateway Community also showed her the unique location the town has among the adventure tourism groups.

"Lincoln is making it off tourism right now. We have the Tour Divide coming through here. We also have the hikers that are coming from New Mexico to Canada, we're right on the trail," she said.

The recognition Ovando received as the Montana Community of the Year for their hospitality towards cyclists helped spur her on even more.

"Ovando. I thought wow. To be so supportive of these hikers and bikers that they know they have somewhere to go to help them out. We've got a community that can be behind them. I thought we can start here and hopefully we can become half as good as what Ovando is."

To begin to improve Lincoln's image, Richards and her husband Doug are starting with the Tour Divide and a "Welcome Cyclists" sign. They've put up a wall tent- on loan from Kenny Low at K Lazy 3 - on their property next to the Wheel Inn to serve as a shelter and rest stop for the Tour Divide riders. Based on recommendations from Daniel they've also created a bike washing station, and have a bike repair stand and tools available for riders to use.

Although Richards is being visibly proactive in her efforts, she's not alone her belief that cyclists and hikers bring an economic benefit to Lincoln.

While Teresa Garland said neither her current business nor the old Garlands Town and Country saw much income from them because they travel so light, she agreed they are good for the local economy.

"They love going downtown, having a hamburger and a beer," she said. "I think it's a pretty easy crowd to deal with too."

For Greg Smith and Julia Johnson, the new owners of The Montanan, cyclists are a welcome group. Though they're not as familiar with the GDMBR, Smith said they had plenty of road cyclists stop at their coffee shop in Malta as they made the trip between New York and Seattle on Highway 2.

Smith understands how road cyclists can cause heartburn with some drivers, particularly on roads with narrow shoulders (something he saw as more of an issue on Highway 2 than on Highway 200), but said they are nevertheless a highly sought after type of tourist.

"They are coming through slower, so they are often going to spend some time in the area," he said.

As Lincoln's newest business owners, Smith and Johnson are still trying to get a feel for the rhythm of the tourist seasons here and haven't see many cyclists come through town yet, but Smith sees Lincoln's position between Missoula and Great Falls as similar to that of Malta, which was a good stopping point between Glasgow and Havre. To take advantage of that, he plans to welcome them and provide them with a place to use wifi, hang out and rest up.

"We embraced them where we were from, we'll embrace them here," he said

For Kathy Schoendoerfer, whose Blackfoot Angler Fly Shop in Ovando has become something of a waystation for cyclists, particularly those on Tour Divide, building a solid reputation among cyclists isn't really that much of a mystery.

Food and shelter are a high prioroity, what really helps is something far simpler.

"The biggest thing they want is just somebody acknowledging they're alive," she said. "To hear just a 'good luck,' a little cheer, a little pat on the back. Nothing really free. That's not what they're looking for. Just a little moral support." 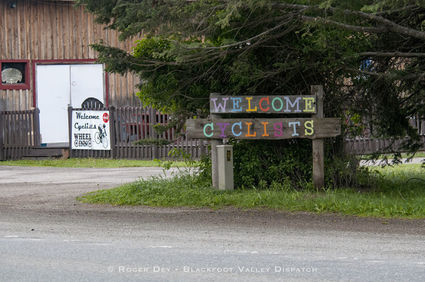 Signs at the Wheel Inn welcome cyclists to Lincoln. Kathy Schonedoerfer, owner of the Blackfoot Angler in Ovando, said simple signs welcoming them to town or wishing them luck go along way toward helping a towns image. "They loves signs," she said.

She said road riders aren't in a race and aren't as muddy as the TDR folks, but are looking for many of the same things. Solo riders may also be looking for someone to talk to if they've been on the road alone for a while, she added.

"There are those people who are the naysayers, who just talk about 'they're dirty; they don't adhere to the rules' and stuff, but to be honest every single one of them I've ever met in Ovando has been so gracious and so happy and kind and freaking generous. I can't say enough good things about them."

She said the only person she ran into who was slightly rude proved to be a popular British actor who was undercover in a race. wearing a funky hat and a "really tacky wig."

Richards wants to encourage other businesses to be welcoming and supportive of the cyclists and hikers who come through town as well.

"If we can help any of them on their journey, I think not only it'll make us feel good, it'll give Lincoln a good name," she said.