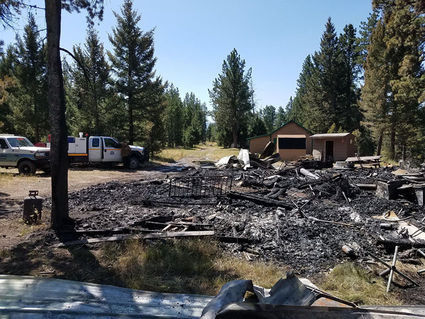 The remains of the cabin destroyed by fire.

A neighbor a few miles away reported the blaze at 6:45 a.m., thinking it was a wildfire. A crew with the Montana Department of Natural Resources responded and Lincoln Volunteer Fire Chief Zach Muse headed up shortly after the DNRC sent an engine out.

Shortly after he got out of town Muse began picking up the DNRC's radio traffic, and it became clear it wasn't a wildfire.

"I could hear DNRC saying 'we're backing out, a propane tank exploded' and I knew that it obviously wasn't wildland, so I paged for a structure fire," he said. Muse arrived to find the DNRC crew busy putting out hot spots in the area around the burning cabin, which was fully involved. 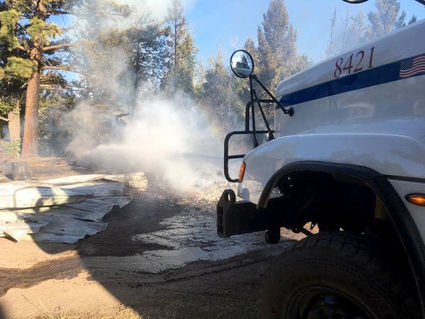 When Lincoln Volunteer Fire Rescue arrived, they put their new tactical tender, "Big John" into action, using the vehicle's front-mounted nozzle to put water on the fire while they got the fire engine staged.

Despite critically dry fuel moisture in the area, the morning's high humidity and calm weather helped to keep the blaze from spreading beyond the cabin area and starting a wildfire.

Since the cabin, located on leased state land, had no electric running to it, Muse suspects propane or possibly a kerosene lamp may have been the culprit. The cause of the fire is still being investigated.

Despite the firefighter's efforts, the building was a total loss.

No one was in the building at the time of the fire. Muse said the owners had left the day before.