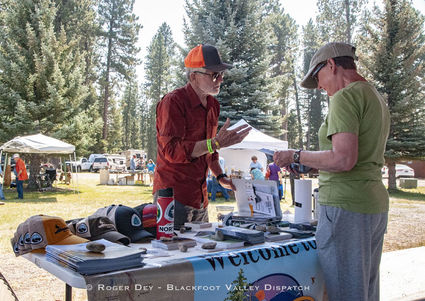 Last year, the Continental Divide Trail Coalition based in Golden, Colo. recognized Lincoln as their first Gateway Community in Montana, and as Marty Bannon sees it, Lincoln's location on the CDT, the Great Divide Mountain Bike Trail and the nascent Montana Trail 406 is something Lincoln can really capitalize on as trail use continues to climb.

"You've got three of the most remote and challenging trails that meet right in Lincoln. There's nowhere else on the CDT where they all come together like they do here."

Bannon, whose trail name is "Race," spent Sunday volunteering to man the CDT Coalition table at this year's celebration, selling CDT maps, hats and other swag, and giving away free information and stickers promoting the CDT. A retired Air Force officer who lives in Great Falls, Bannon stepped in to support Lincoln and the CDTC while other members of the CDTC were in Anaconda, which is also seeking Gateway Community recognition.

"I think it's great Marty Bannon came by," said Laurie Richards, president of the Lincoln Valley Chamber of Commerce. "He's a CDT enthusiast and is doing a great job explaining to people what the CDT is about."

It isn't the first time Bannon has lent a hand to Lincoln. Earlier this year he helped promote the town at a CDTC festival in Silver City N.M., the nation's first CDT Gateway Community. He explained that the CDT is the longest and most challenging of the country's "Triple Crown" trails, which includes the Appalachian Trail and the Pacific Crest Trail, and Lincoln sits in a key spot, particularly for southbound hikers.

"The longest unsupported stretch on the Continental Divide Trail is the Bob; Marias Pass to Rogers Pass," he said. "By the time you get there, you've spent ten days on the trail, you want to go to town and resupply and get clean."

For northbound hikers, Lincoln is also the last place they can resupply before hitting the Wilderness Complex.

"The same with the Great Divide Mountain Bike route and race," Bannon said. "When you come out of (Huckleberry) Pass you're ready to be in town. To me it is a foundation of all trails; it's the first major town you come to. And I know using major and Lincoln in the same sentence, is odd, but for hikers and bikers it is."

A longtime CDT supporter and volunteer, Bannon has a well-informed perspective on Lincoln's location on the trails. In 2015, he hiked the 3100-mile length of the CDT from New Mexico to the Canadian border. Not content to stop there, last year Bannon tackled the 2800-mile Great Divide Mountain Bike Trail, riding from Banff to the Mexican border. It's the same route used by the Tour Divide mountain bike racers. On top of that, he's also working to develop and promote the statewide Montana Trail 406.

"As I was hiking north in 2015, I realized Arizona has a trail, Idaho has a trail, Oregon has the desert trail, Colorado has a trail. State trails. So I said 'here we are, we have 931 miles of the 3100 miles of the CDT.' A third of the Continental Divide Trail is ours," he said. "If you take that foundation as a Montana trail, we've got 931 miles already done." 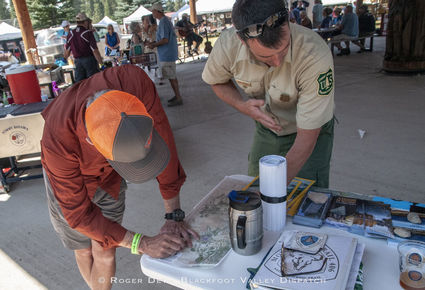 Lincoln District Range Michael Stansberry discusses the location of the Trail 467 Fire near Granite Butte with Bannon. The fire closed a section of the CDT Sunday.

The rest of the Montana Trail 406 gives a variety of the whole state and includes a route through the Belts and some of the other island mountain ranges, as well as 134 miles of the already-designated wild and scenic Missouri through the Missouri Breaks National Monument and CMR National Wildlife Refuge.

As Bannon sees it, Lincoln

"I think what the Chamber of Commerce is doing-embracing it-is critical for Lincoln as a first step, but I think there is a lot more that Lincoln can do," he said. "It's