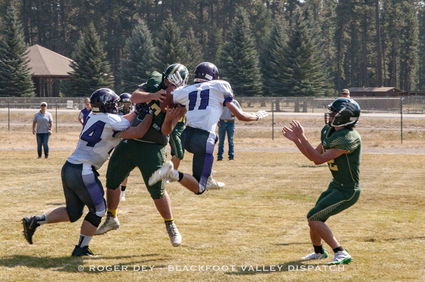 Jager Vossler pulls down a touchdown pass in the end zone, amid stiff Panther coverage.

Junior Nathan Brown led the Lincoln Lynx as they scored 44 points, seven touchdowns and two extra points, in their tough-as-nails fight with the visiting Sheridan Panthers on a beautiful fall afternoon last Saturday.

The Lynx threw down the gauntlet at the opening whistle scoring a quick TD on a 45-yard run into the end zone by Brown. The next Lynx score was a pass from Brown to Aziah Blotkamp to tie up the game, but then the Panthers answered, going on a four touchdown jag to show everyone they came to play.

Sophomore Trenton Grantier said the team was really getting into their grove by the second quarter when they were playing, "smarter and quicker." Grantier and sophomore Kenny Benefield made some textbook tackles in this half which also showcased Joey Weiderhold with a crowd-pleasing 30-yard run and a 45-yard kick-off return. 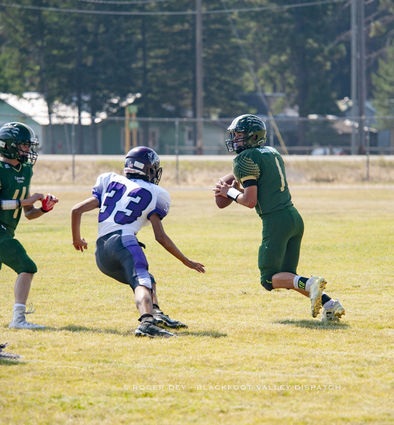 Fans of six-man football sometimes need a calculator to keep track of the score as it jumps up by leaps and bounds with so much empty space inviting thrilling plays. The open field saw big man Jager Vossler, 5-foot-10-inch and 270 pounds, go thundering down the field in the second quarter to get into the end zone for Brown to launch a 30 yard pass that landed right in his hands. After getting some oxygen at the half rest, Vossler repeated another long 35-yard run for a second time, making a target too big to miss for Brown's TD pass.

During the fourth quarter, Brown repeatedly sprinted down the field, running in three more goals and giving the crowd their money's worth of exciting gridiron action.

Valuable 6-foot-2-inch tackle Noah Belcher went out of the game with an ankle injury that may sideline him until the next home game, Saturday, Sept. 22 against Lima at 1 p.m.

The scoreboard tipped the balance to the Panthers when the final buzzer sounded,

44-69, but the Lincoln men were enthusiastic about their best game yet this year.