Tour of the Arts brings visibility to local artists 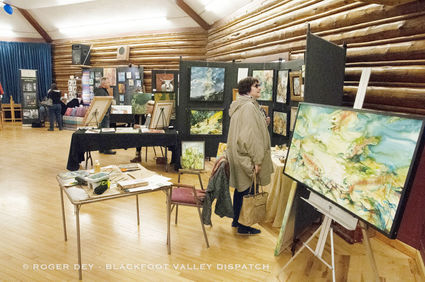 A visitor to the Lincoln Community Hall peruses Annie Allen's artwork during the Tour of the Arts Sunday afternoon.

The Alpine Artisan's Tour of the Arts returned to Lincoln last weekend as the Lincoln Art Haus Co-op once again hosted an exhibition and sale of their artwork at the Community Hall.

Annie Allen, founder of the co-op, said the growing organization now has nine members, including new member Tammy Jordan, a fiber artiss who recently returned to Lincoln. Only one member of the co-op, Steve Woodhouse missed the tour this year, but they invited Margaret Rose Chiltwood, a visiting artist from Arizona and a friend of Allen's, to display as well.

Allen said the Tour does a great job of bringing people together throughout the Seeley-Swan and Blackfoot corridor to learn more about the arts and the local artists.

"What I'm seeing all day long is people talking and sharing about the arts," she said, adding that people are very interested in the impetus behind the artwork. "They really want to know why we create what we create, is what I'm seeing. That's asked all the time."

Like Lincoln, Ovando is also a stop on the Tour of the Arts. The Brand Bar Museum has been hosting artists for several years, providing them with display space amid the historic artifacts.

This year, the weekend traffic at the museum proved slower than usual, a fact local jewelry-maker

Angela Williams chalked up to the weather Saturday.

"I didn't know we'd be waking up to snow," she said. "We have had people from Helena, but probably the weather's gonna impede some of them."

Williams, who largely eschews beads in her jewelry and focuses in creating unique patinas on metals like copper, said there was a lot to see for the folks who did venture out. "People have no idea there are so many people in the area who do such cool stuff."

Diane Whitehead, an oil painter who lives in Ovando, said that's one of the main benefits of Tour of the Arts. "I think it helps people become more aware of how many artists are really out there, in the boonies, doing their thing at the end of the dirt road," she said.

Like Allen, Whitehead sees the tour as a way for artists to share their work, not only with visitors, but also with other artists.

"It's a good time to bring artists together," she said. "It's a lonely profession, so it's nice just to chat about their different styles and the things they do. 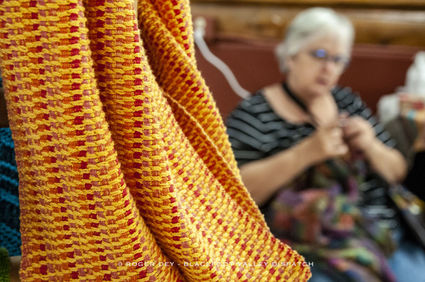 A colorful handwoven piece by Mary Jean Martin is draped on her display as she works on a new piece in the background.

Tour of the Arts, which until a few years ago focused mainly on the corridor from Swan Lake down to Ovando, remains a relatively new but growing addition to Lincoln's community calendar.

Allen said she thinks Sculpture in the Wild certainly encouraged Alpine Artisans to take a greater interest in Lincoln's artist community, but said they don't get all the credit, since she and fellow co-op artists Judy Johnson and Lisa Gibson have all been members of the Artisans for at least six years.

"They lift you and they support the arts and I love that about them," she said.