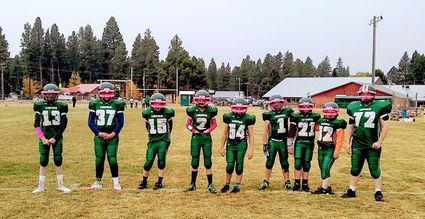 The 2018 season closed Oct. 5 and 6 for the Lynx junior high school boys after exciting contests against Hot Springs and St. Regis.

Despite having only six players suited up for the away game against the Hot Springs "Savage Heat" squad, the tough Lincoln gridders had a close match and lost by just four points, 40-44.

There were no relief players waiting on the bench to give the Lynx starters a breather, but according to Coach Kara Demptster, the team was still playing their hearts out when the final buzzer sounded. All their physical training paid off.

Quarterback Wesson Dempster and center Trevor Tolan had worked in practice on a new play called a 'center sneak' where the quarterback placed the ball on the ground after the snap and then casually walked away. While confusion reigned among the opposing players, the Lynx center surreptitiously slid over, picked up the ball, and ran down the field. Apparently a legal maneuver, the trick play always resulted in gained yards and it wasn't even Halloween.

Coach Dempster reported that the Hot Springs young men "were a nice team" with lots of positive sportsmanship and helpful referees. In a world that seems to be spiraling down into a morass of bad behavior, the good feelings on the Hot Springs field will be long remembered.

The Saturday home contest against St. Regis was a David and Goliath imbalance.

St. Regis had a whole horde of 8th grade Tigers and enough players to field three squads. But the gritty younger Lynx courageously faced them down, scoring four touchdowns and making all the extra point runs also. The win went to St. Regis 28-67,

The Little Lynx will only graduate two 8th graders from the eight-man team so the 2019 season looks promising. The Lincoln coaches noted the "amazing tackles" by Jordan Rios in the St. Regis game and the stronger, more confident play by 6th grader Noah Barnett against Hot Springs.

The junior high players demonstrated determination, character and discipline" according to their coaches. "Team spirit is strong right now and the winners who never quit will be back next year."