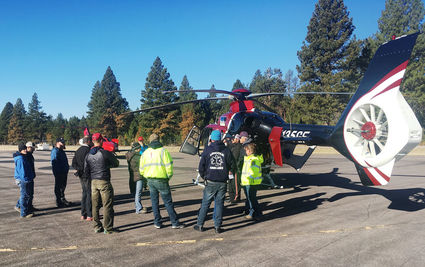 Members of the Lincoln Volunteer Ambulance join Mercy Flight crews as they go over safety procedures for the EC-135 helicopter.

Last Wednesday about 45 members of the Mercy Flight air medical service from Benefis Hospital in Great Falls descended on the Lincoln Airport for their annual Safety Stand-down.

Every year, Mercy Flight takes and operational break - effectively going out of business for the day- to review their safety procedures, conduct cross training between the medical specialties within their own ranks, and to train with other first responders in the various areas they serve.

Mercy flight Director Kevin Langkiet said they began the practice of visiting different airports for their training shortly after he joined the program in 2015 to give his emergency personnel a better chance to get on the same page when they're dealing with emergencies in different environments.

"The very first year I was with the program, they did it at the hospital. I said, 'Oh, we're not doing this anymore,'" he said. "We all live at the hospital; we know what that's like, so we get out."

Langkeit said this is the first year they brought the training to Lincoln, which is on the outer edge of their normal service area.

Langkeit said they've been impressed with the Lincoln Airport, which is long enough for them to land Mercy Flight 2, their Cessna Mustang, which is the only true jet among all of Montana's air medical service. He said the only real issue with the Lincoln Airport is that it doesn't have instrument controls for landing fixed wing aircraft in low visibility. However, the airport is considered a prime candidate for installation of the equipment necessary for Instrument Flight Rules.

Part of the effort to familiarize Mercy Flight crew members with the different communities in their service areas includes an invitation to local agencies to take part in their training.

"We always get the local agencies involved," Langkeit said. "A lot of the agencies are volunteers, so they don't get a lot of exposure to education. This is our chance to work with them."

Last week, several members of the Lincoln Volunteer Ambulance took the opportunity to join in on the training.

"It's great to work with another agency, to get some outside training. It's nice to refresh and get some perspective from somebody else," said Lincoln Ambulance President Aaron Birkholz. "We work with their helicopter, so it's just nice to see all of the faces, kind of to know people. I didn't know there were so many of them."

Those different perspectives are an important part of the medical training during the stand down, Langkeit said. For that reason, they split the Mercy Flight personnel into teams that include specialties that don't always work together.

"I think it helps both us and them put things into perspective on how you've got to work together, and the expectations on both sides," said Lauren Swant, a member Mercy Flight's neonatal intensive care unit team.

"It reinforces some of the basic stuff we do that's second nature, that sometimes we overlook as far as thinking about that process," said Wade Wagoner, who was one of the main planners for the day's events.

The Mercy Flight crews also had the opportunity to cross train with a Montana Highway Patrol trooper, who gave them instruction on scene safety during vehicle accidents. In turn, it gave the Mercy Flight crews a chance to tell him what they need to see on their end to safely land a helicopter at a scene.

The training also brought in dispatchers from Lewis and Clark County, who went through the skill station training Wednesday morning. 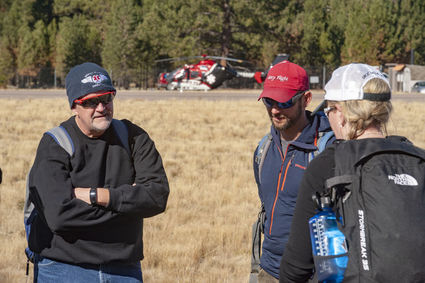 Kevin Langkeit, director of Mercy Flight, looks on as Crystal Todd and Wade Wagoner talk through the injuries of a simulated casualty.

Mercy Flight is one of four hospital-based air medical transport services in the state that work together and are certified under the Commission on Accreditation of Medical Transport Systems, the agency that ensures a consistent quality of care.

In addition to their Cessna Mustang, Mercy Flight also flies a Eurocopter EC-135 as their rotary wing aircraft.

Like their ground-based counterparts, the aircraft are fully licensed ambulances. Staffed with a nurse and medic, they carry the higher critical care rating, effectively making them flying Intensive Care Units.

Langkeit said as a hospital-based service, their bill is looped in with the overall hospital bill. He explained that, unlike some independent air medical services, they accept what a patient's insurance pays and don't go back to patients later with additional billing.