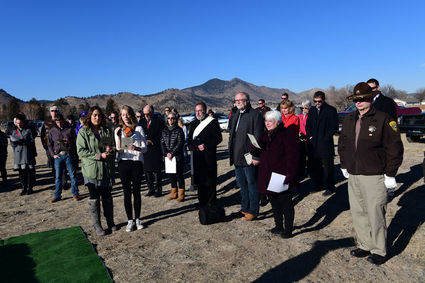 According to findagrave.com, there are 1,454 remains interred at the Lewis and Clark County Cemetery in Helena. Fifty-three of those were added last week during a burial ceremony for unclaimed and cremated remains that had accumulated for over 80 years in funeral homes and even in the coroner's office.

The ceremony was called "Remembering the Forgotten."

Before the burial, eleven sets of remains were claimed by next-of-kin. Seven were discovered to be veterans, so they were sent to Fort Harrison for burial.

One cannot help but wonder why these "cremains" remained unclaimed? Was there some deep rift in the family that time, so far, has been unable to heal? Maybe the surviving family is unable to afford other arrangements?

We may never know the answer to those questions, but like any cemetery, the county cemetery in Helena has stories to tell.

Tung Hang Wong was born in Canton, China and arrived in Seattle on the "Aki Maru" on December 4, 1914. On the arrival record, it was noted that Tung would be working in Helena as a laborer. Tung never married and spent his life in Helena as a laundryman and cook until he retired. On August 10, 1955, Tung passed away at his home on W. Main Street in Helena.

Tung's grave is easy to find, it is the only one in the cemetery covered by a slab of concrete, near the site of last week's burial.

Also nearby are the side-by-side graves of a father and son, 26-year-old Robert Anthony Johnson and his father, Eugene Willis Johnson. Their headstones record that both died on the same date, Sunday, March 15, 1992. Newspapers at the time reported the tragedy as occurring when the car, driven by the son, "plunged off a dirt road down a steep bank and into Hauser Lake." The Montana Highway Patrol said Robert missed a sharp curve one-quarter mile south of Hauser Dam and went over a 55-foot bank, where the car he was driving landed 30 feet from shore "and sank in water that is 15 feet deep."

Last week, it was quite a crowd that gathered to pay their respects.

The remains were placed in a burial vault, with each set of remains identified. According to Lewis and Clark County Commissioner Susan Good Geise, that was done in case a family later wanted to claim their relative's remains for burial elsewhere. The family would have to pay only for the removal and reburial of the vault.

Asked if the next-of-kin of the remains buried last week might have been unable to take possession of their loved ones due to the costs, Geise told the Sun Times that there was no cost – even the shipping charges.

"You can't just put stamps on the remains," said Geise, "it cost about $65.00 to send human remains, but the county will bear that cost."

The ceremony included a traditional singing of a Native American prayer by the Magpie Singers.

Janet Tatz, lay leader of the Jewish community in Helena, recited the "Mourner's Kaddish," the prayer traditionally recited in memory of the dead, although it makes no mention of death. Tatz said that this day was the tenth anniversary of the passing of her father, and that traditionally, she would have observed the date in private.

Tatz was joined by Rev. Steve Bostrom and Deacon Bob Fishman of the Cathedral of St. Helena.

Officers with the Lewis and Clark County Sheriff's served as the Honor Guard.

But it was a group of students from Augusta High School that really made the day special.

Students Jae Allen and Macyn Mahlum opened the ceremony with the National Anthem, and the pair brought the ceremony to a close with "Amazing Grace," performing the old hymn so well that those gathered were moved to join in.

Augusta High School teacher Tim Love was there with two members of his shop class. The class constructed a metal sculpture placed at the head of the grave where the remains were buried. Commissioner Geise chose the color for the metal memorial, which was powder-coated courtesy of Powderwerks.

After the ceremony came to a close, Commissioner Geise commented to the Sun Times about how wonderful it was that so many people came out to pay respect to these forgotten people. Geise nodded toward the graves of two ladies buried not long ago. "I try to come out here whenever there is a burial," she said. "I was here when these ladies were buried, both of these women were mothers, but there was no family here. It's sad." 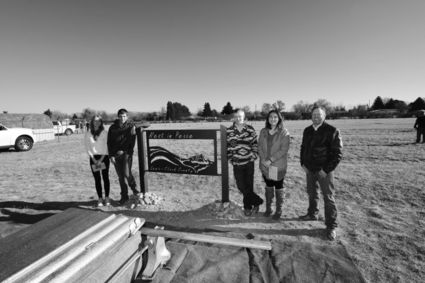 Macyn Mahlum and Jae Allen and, joined by members of the crowd including Lewis and Clark County Commissioner Susan Goode Geise, bring the ceremony to a close with a performance of 'Amazing Grace.'

But Geise motions toward another grave, a little farther down the row. "See that grave. That man worked for the railroad. When he was buried, his friends and co-workers put a railroad lantern and train ticket book in the casket with him." Geise looked me right in the eyes and asks if I know why the dead railroader's friends put a ticket book in his casket. When I shake my head, Geise looks at me over her glasses, and with a mischievous smile, she says, "So he could punch his own ticket."

After the ceremony Geise took her Augusta guests to the Grub Stake restaurant and treated them to lunch.

Later, a granite memorial will be placed courtesy of Montana Granite. Forest Vale Cemetery, located across the street from the county cemetery, provided assistance and Anderson, Stevenson and Wilke Funeral Home supplied the vault.

Note: The Sun Times received additional details from the Lewis & Clark Coroner's Office after the Sun Times Nov. 29 print edition went to press. This story has been updated to reflect the additional information.

Republished with permission of the Fairfield Sun Times