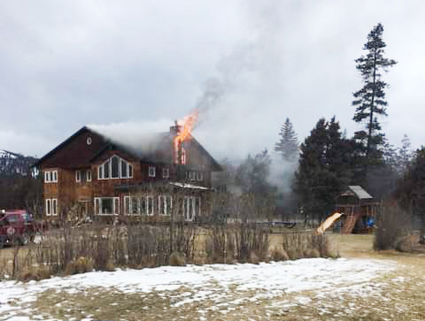 A column of flame erupts out of the chimney area of the Brown home Monday, Dec. 10.

A fire believed to have started near the top of the chimney caused significant damage to a home on Dalton Mountain Road Monday afternoon, Dec. 10.

The fire at the home of Shane and Teresa Brown was primarily isolated to the chimney and attic area of the house, but smoke and water damage resulted in an estimated $400,000 in damage to the three-story home.

Teresa Brown said her mother, Mary Kornec, who lives next door, saw excessive smoke coming out of the homes chimney at about 2 p.m. that day and called 911.

Shane Brown and Lincoln Fire Chief Zach Muse were the first to reach the building.

Brown got a water hose into the top of the chimney to slow the fire, but seriously injured his knee when a collapsing section of wall forced him to jump from the ladder he was on.

Muse also hit the fire with a water extinguisher he was carrying. It helped cool the fire and slow it's spread while the other firefighters responded, but he too had to abandon that effort when debris started falling on him.

"We closed doors inside to try to isolate the airflow and keep it from getting oxygen. Once we did that it slowed down a little bit," Muse said.

Muse said the fire prompted one of the best firefighter responses he's seen, in terms of the number of volunteers who showed up for the call.

"It was quick and we got water on it real fast," he said, but added restrictions on Dalton Mountain Bridge forced them to detour the larger trucks the long way around Herrin Lakes Road.

Muse said the firefighters do their best to limit damage caused by firefighting efforts when they can, but some is inevitable.

"Water damage is usually pretty significant. We try to control it. And we didn't us a lot of water on that fire. We didn't have to, but when you're dragging a couple hoses through someone's house, as big a house as it was...unfortunately it does happen," he said.

The fact that the fire was in the upper story of the building also contributed to the amount of damage. Muse said in such cases water comes through the ceiling of the rooms below and runs down to the lower levels, destroying drywall as it goes.

In a post on Facebook, Teresa expressed appreciation to the firefighters for saving as much as possible. She told the BVD they were surprised to learn how extensive the damage to the home proved to be, much of it from smoke damage. In addition to the burned trusses and siding they will also need to replace most of the home's drywall and anything that was made of particle board that was damaged by water, which includes most of the kitchen cabinetry and counters. Likewise, she said most of the electronics, furniture and appliances will probably have to be replaced due to smoke or water damage.

She said the fire, coming as it did before Christmas has been tough on the family, which includes five children. 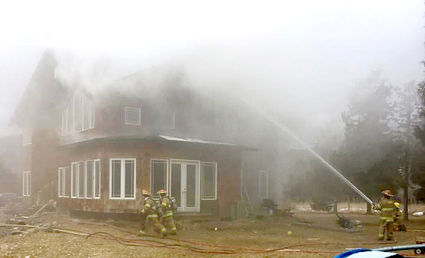 "The kids are having a really rough time," she said. "But it also really brings us down to earth. Our family is OK and the rest is just stuff."

Teresa said she's glad the fire started during the day, rather than in the middle of the night when everyone would have been asleep.

Despite the damage to their home, which she was told may not see all the necessary repair work done until next Thanksgiving, Teresa said the family is thankful for the support they've received from the community including meals and a place to stay. In her Facebook post, she also noted that a Christmas tree appeared in their temporary home.

"It's very heartwarming, all the support we received from the community," she said. "I'm thankful for so much."