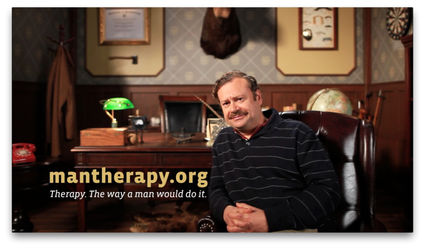 A new public health program that launched in September is aimed at lowering the stigma associated with mental health issues like depression and suicide, and providing a friendly environment for Montana men to address the care of their mental health "the way a man would do it."

"We have the highest suicide rate in the country, and by far the most of those are middle-aged men," she told the BVD. "We launched this program in September, and I think the sooner we get the word out, the better."

Montana's suicide rate per capita is currently first in the nation, and the state has hovered in the top five for the past thirty years. According to Center for Disease Control and Prevention data, in 2016 there were 25 suicides for every 100,000 residents – nearly twice the national average. By far the highest percentage of suicide deaths, both in Montana and nationwide, are men between the ages of 25 and 55. In Montana, military veterans and Native Americans are the two most at-risk groups.

Social factors associated with suicide include isolation from peers or troubled social relationships, a lack of the regulatory societal constraints necessary to control society members' behaviors, downward socioeconomic mobility and rural residency. Approximately 90 percent of those who commit suicide also suffer from major depression, alcoholism, or both.

Although mental health funding in Montana has increased by millions of dollars since 2011, the budget still lagged behind those of states with similar populations. Mental health clinics serving Montana communities were already struggling to meet the state's needs when budget cuts in 2017 lowered funding and put an end to many clinics and outreach programs across the state.

The Man Therapy program and its website, Mantherapy.org, seeks to help fill the void with resources geared toward the group with the highest risk, nationwide – working aged men.

Working aged men account for 78 percent of suicide deaths, according to data quoted on the Mantherapy website, and are also the least likely to receive mental health support. Often, men don't discuss their mental health with friends or family or seek professional treatment. According to the program, many of the men who succumb to suicide are the victims of problematic thinking that says mental health disorders are unmanly signs of weakness.

First implemented in Colorado, Man Therapy is tailored to address men's mental health issues and suicide prevention. A public education campaign that allows local partners to bring the campaign to their community and implement local outreach. The program utilizes advertising, social media, social gatherings, and increased awareness of and access to resources to address mental health issues such as anger and rage, stress, depression and addiction.

Unlike traditional therapy, Man Therapy relies heavily on humor and a relaxed atmosphere. The idea is that men are attracted by the campaign's dark, tongue-in-cheek humor and directed to mantherapy.org. When accessed, the easy-to-use website draws users in with humorous taglines such as "that funny feeling inside might not be burrito-related," and provides access to a quick and anonymous mental health screener, coping resources, information on how to seek professional help, access to suicide prevention lifelines and online chat and more. The website also has resources specifically tailored to veterans and first-responders.

Since the website launched in September, there have been more than 900 new users, and because one of the hallmarks of suicide is social isolation, Lewis and Clark Public Health has hosted several "Guys Night Out" events and gatherings in connection with the program, ranging from "Bro'ga" hot yoga to "Beards on the Gulch 2018" facial hair contest. Gatherings will continue in the new year. 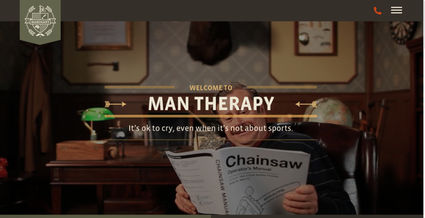 Hegstrom said she hopes the program will continue to gain momentum and become more recognizable within the community. She encourages those who are aware of the program to tell a friend, and to share Man Therapy info and events on social media.