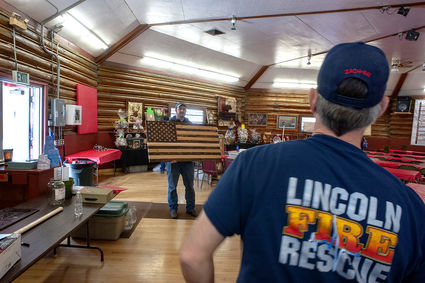 Lincoln Fire Chief talks to Ward Roberson as he carries a wooden flag wall hanging into the Community Hall.

Lincoln firefighters descended on the Lincoln Community Hall Friday afternoon and Saturday morning to prepare the hall for their annual Fireman's Ball.

Lincoln Fire Chief Zach Muse said efforts to get the Fireman's Ball up and running was "a bit chaotic" this year, following a few tough months.

Muse said circumstances this year, including the passing of Fire District Chairman Bill Frisbee, health issues within the families of various firefighters and even the extra plowing that had to be done, forced everyone to step up a little more and made getting everything together for the ball a little rougher than usual.

"We worried a little bit we were way behind, but things are kind of coming along nicely," Muse said Saturday as firefighters strung lights among the silent auction items arrayed around the walls of the hall. "The town really came together and helped us out."

This year's silent auction items featured several quilts and pieces of artwork, and donations for the live auction this year included an original Michael R. Brown artwork and a king-size quilt by Jesse Sallin, both of which brought in $600 each, as did a handmade "Thin Red Line" American flag coffee table built by Shane Brown's Lincoln School shop class.

"Those guys did a phenomenal job on that table," Muse said.

Perhaps the most unusual live auction offering of the year was a pair of vintage Cabbage Patch dolls donated by Lola Arvidson. Dating to the Cabbage Patch craze of the 1980's, the dolls - with an array of hand-sewn outfits by Arvidson and a quilt by Sallin - made $200 for the department.

Other live auction items included guided trips into the back country and a Pulaski signed by the firefighters.

Muse said they'd have done more live auction items but decided to limit it to just five or six items in the interest of keeping the evening moving along.

"If you start stretching it out too long people get antsy," he said.

Firearms have also been a reliable fundraiser at the ball, but this year they took they took a different approach to them, at the suggestion of Lincoln Stage owner Chad Sutej.

"This year ... we've got the 'hook and ladder,' which is similar to the wall of guns the Friends of the NRA does," Muse said. He explained that people buy chances for a gun for $20 each. Once 50 tickets are sold, the firefighters hold a drawing, allowing the winner to choose their prize from the 'hook and ladder' display. Then they start another round.

They also had one gun set aside for a special offer at the door, for which they sold ten tickets at $100 each. Buying one of the tickets got the purchaser into the ball for dinner and gave them a one in ten chance of winning 10 chance of winning the gun.

Muse said Sutej worked with Murdoch's in Helena to provide the guns at cost, which kept out of pocket expense for the LVFD down.

"It helps us because we don't have to buy the guns," Muse said. "They give us a price, we pay for it out of the proceeds, then the (winners) have to go pick it up and transfer it and all that."

Although the 'hook and ladder' items weren't physically at the ball, Muse said it nevertheless proved to be a huge success, netting the LVFD $4800. 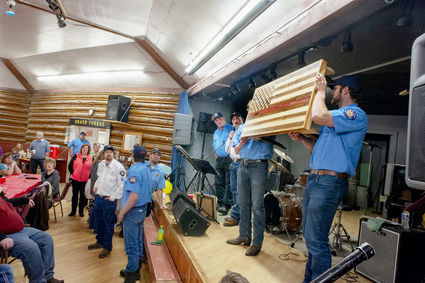 The auction gets underway for a 'Thin Red Line ' coffee table created by the Lincoln School shop class. The table brought in $600.

Muse said the Fireman's Ball drew around 300 people this year. Although that's about average, it was down by about a 100 people from last year's record-breaking event, which pushed the limits of the Community Hall's capacity. Despite the smaller crowd, Muse thinks the income from this year will be close to that of last year, which set a record by netting around $20,000.

Proceeds from the Fireman's Ball helps the Lincoln Volunteer Fire Department by funding improvements to equipment and infrastructure that aren't usually covered by the annual tax-base income the fire district receives.

Money from this year's event will go toward the purchase of the property adjacent to the Lincoln Fire Hall on Stemple Pass Road in downtown Lincoln.