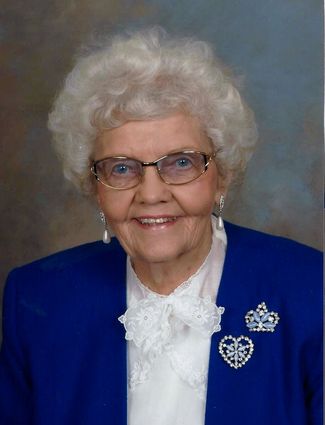 Lola Ardene Hanson Arvidson began her journey to heaven on March 30, 2019. Her husband, son, daughter and son-in-law were with her as she set out on her adventure. Lola was 92 years old. She was born April 20, 1926 in Spruce Hill Township, Minn. to Walter Rudolph and Sadie Engstrand Hanson. She was the eldest of their three daughters.

Lola attended country schools and graduated from high school in Alexandria, Minn. in 1944. Following graduation, she worked various jobs, some of which were in WWII defense plants. In later years, Lola joined the Rosie the Riveter organization.

Lola married Harry August Arvidson on Sept. 14, 1946, following his discharge from the US Navy, after serving aboard submarines in the Pacific during WWII.

Harry and Lola had two children: Lynda Cambron and Scott Arvidson. In 1956, the young family of four moved to Conrad, Mont. and began their career of owning the Home Cafe. In 1982, their son and daughter-in-law assumed ownership of the Home Cafe. In 2018, the Arvidson's and Home Cafe celebrated 60 years in business. Many friends have walked through the front door over the past 61 years. In 1988, Harry and Lola moved to their home in Lincoln, Mont. For many years, they wintered in Apache Junction, Ariz., spending warm winters with many wonderful friends. For the past 10 years, they have been living year-round in Lincoln. For many years, they traveled in their Airstream trailer, caravanning with other Airstreamers. In 1992, they traveled in their motorhome to Alaska and while in Prudoe Bay, put their hands in the Arctic Ocean. Harry and Lola were active in the national and state chapters of the Submarine Veterans of WWII for many years.

Lola enjoyed keeping in touch with many friends and family, always sending greeting cards and letters. She enjoyed sewing, antique collecting, and playing cards and other games. She always had some sort of project that she was working on! She liked to wear hats! She liked to dress stylish and wear pretty jewelry! Her wit and humor carried her through to her final days. She will be missed by many. Lola is survived by her husband, Harry; her daughter Lynda (Jim) Cambron of Boise, Idaho; her son Scott (Pam) of Conrad; her grandchildren Shaloe (Leo) Brown of Medford, Ore., Taylor "TJ" (Michelle) Cambron of Boise; and Amanda Arvidson (Mike) of Conrad. Her great grandchildren are Gage Cambron, Makana & Kaimana Brown, McKenna & Jaxon Arvidson, and Boston McLaughlin. She is survived by two sisters, Eldru Hinz and Vernette Hanson.

Services are to be held at a later date. The family would like to express their heartfelt thanks to the Compassus Hospice of Helena and special thanks to Mom's nurse Sarah and CNA Jessica. Memorials are suggested to be given to the Lincoln Volunteer Ambulance, P. O. Box 455, Lincoln, MT 59639. You can visit the website of http://www.aswfuneralhome.com to leave condolences for the family.