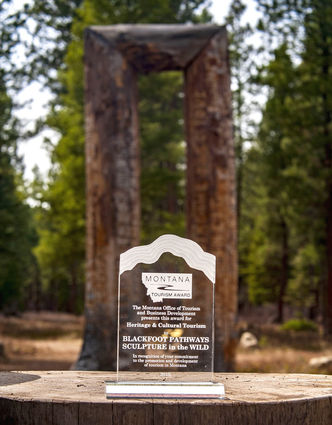 The Sculpture in the Wild Heritage and Cultural Tourism award sits on a step at 'Gateway of Change', a sculpture by Jorn Ronnau of Denmark that symbolizes change and aspirations.

In a nod to Blackfoot Pathways: Sculpture in the Wild's cultural and economic impact, the Montana Office of Tourism and Business Development recently awarded the sculpture park their Heritage and Cultural Tourism award.

In the award's wake, local business owners reflected on the park's impact on tourism commerce in Lincoln.

Laurie Richards, who owns the Wheel Inn Bar, provides BPSW brochures on the tables in her business and often steers travelers to Sculpture in the Wild. She said the park has generated business for her and her family.

"I have had people come into my business and say they're headed for the Sculpture Park," said Richards, who remembers one family who visited last fall came to Lincoln specifically to take costumed Halloween photos in Patrick Dougherty's sculpture, "Tree Circus."

Richards believes Sculpture in the Wild to be one of Lincoln's most valuable tourism assets.

"I think it's just going to keep getting bigger, and I think this award is huge. To even be in the three finalists is just amazing," she said.

Sportsman Hotel owner Dick Birkholz said he supports the park, although visitors to the park haven't generated him any revenue that he's aware of. Birkholz thinks that as Sculpture in the Wild grows in acclaim and recognition, it can only help the Lincoln economy.

"I send a lot of people out there," he said. "I think it will become a really good deal. I was on the Board of the Chamber of Commerce when [co-founder] Rick Dunkerley came in with the idea for the park, and I said 'yeah!'

"The Chamber of Commerce needs to support anybody who has any idea to bring people into town, and help them with it. I think the park, the Arts Council and the people working on stuff around here – they're bringing a lot in. They're doing some good work. This is big stuff, for this little town."

Pit Stop Restaurant owner Jill Frisbee said she has noticed increasing interest in the park since its inception in 2014.

"People are coming, and it's more every year," she said. "I've only ever heard positive things about the park from people coming through town. Anything negative I've heard, it's usually from someone local, and they usually haven't been out to see it."

Frisbee said it's not uncommon for people to drive to Lincoln for an afternoon, visit the park, then stop in to her restaurant, located on the east end of town, for a meal.

BPSW was chosen as a finalist for the Tourism award thanks to around thirty nominations and beat out fellow nominees The Archie Bray Foundation of Helena, and The Montana Chainsaw Carving Competition in Libby.

"We had several nominations from Lincoln, and actually several from people all over the world who saw how to nominate us on Facebook," BPSW President Becky Garland told the BVD.

The Lincoln Valley Chamber of Commerce was amongst those who wrote in to nominate Sculpture in the Wild. Richards, who's also the LVCC President, said she composed the nomination letter with the help of her daughter-in-law, Jackie Daniel.

"The Lincoln Valley Chamber of Commerce proudly supports the Blackfoot Pathways: Sculpture in the Wild," the nomination letter read. "BPSW offers a unique art experience that changes with the seasons and celebrates the rich cultural, environmental and industrial history of the Blackfoot Valley...BPSW has brought such a positive economic impact to our community."

In addition to the nomination, Richards said the Chamber has contributed financially to the park in the past and is currently a participant in the park's "Three Year Donor" program, which pledges $2500 per year for three years.

Garland reasons the award can only bring more visitors to Lincoln.

"I'm sure we will now have a presence, maybe a picture of the park, on the Visit Montana website," she said. "Just the fact that our peers and the people at the Tourism Office saw their way to giving us the award...that was just great."

"I think people are going to hear about us more, and they're going to see that we got this tourism award, and if they haven't already been to the Sculpture Park they will be curious and want to go to it," Richards agreed. "Any recognition is great for Lincoln."