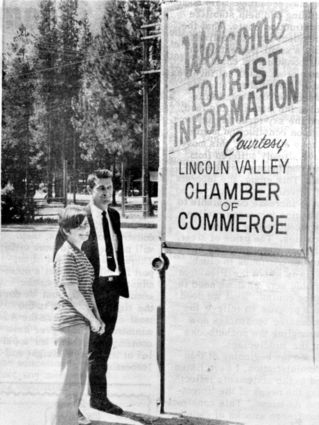 Michelle Nelson, with the Neighborhood Youth Corps and Sonny Bruner, who was NYC director for the Rocky Mountain Development Council stand by the sign for LVCC's Tourist Information booth at Jean's Donut Shop in September 1969.

Explosive growth was on the horizon for Lincoln in early 1969.

Just 12 years before Lincoln's population and economic prospects saw a boost when, Highway 200 - then Highway 20 - officially opened in 1957, providing a direct route between Missoula and Great Falls.

In 1965, the Anaconda Copper Mining Company began exploring development of a copper and molybdenum ore body in the Heddleston mining...