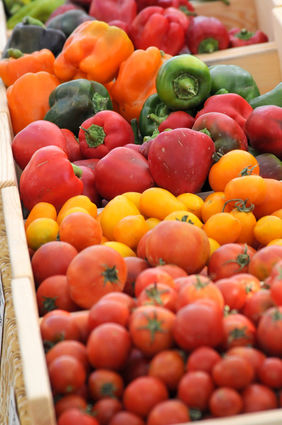 Fresh produce at a Farmer's Market.

Farm fresh produce, handmade foodstuffs, unique arts and crafts, and live music are just some of the attractions browsers will find at the new Lincoln Farmer's Market throughout the coming summer.

The farmer's market is scheduled to open for business at 4 p.m., Friday, June 7 at Hooper Park. The market will continue on the first and third Fridays of every month, from 4 to 8 p.m., through Sept. 6.

Twelve vendors selling everything from produce to pottery have reserved spots for the market's inaugural day, and organizers expect it to grow throughout the summer. The market will also feature live music by local artists, and a free concert July 5 by Billings band Arterial Drive.

"We have some local vendors. We also have Gaines Produce out of Great Falls as well as some other vendors coming from Seeley Lake, Helena, Missoula and other areas," team member Tammy Jordan said. "There will be produce, hand crafted items, and the Blackfoot Gardeners and the Lincoln Community Garden will be part of it as well."

Jordan said the Lincoln Community Garden will most likely be offering plant starts to begin with, as the local growing season hasn't yet taken off.

"It does depend on the time of the year," she said. "There will be different items throughout. Gaines will have local as well as bulk produce out of Washington, so we will have a big variety of bulk produce by the pound."

Organizers are currently on the lookout for more vendors. Jordan said pricing for the booths is twenty dollars per week, and drops to fifteen dollars per week if a vendor commits to be at all of the markets throughout the summer.

"What I've heard from other communities that are about the same size as Lincoln and have started farmer's markets is that they do start really small, but within three or four years they see a lot of growth," said organizer Karyn Good. "My hope is that by 2023 we have at least tripled our vendors."

She said the farmer's market in Seeley Lake started out with ten vendors, and by the time their community foundation took it over, it had forty-five vendors at times.

With more than seventy-five farmers markets throughout Montana, vendors have a lot of options. However, Lincoln's centralized location could work in its favor as interest in the market takes off. Good said organizers hope to eventually offer a variety of locally-grown options.

"We're starting with produce from Washington with the hopes of getting somebody more local, eventually," she said. "Even more than growing vendor-wise, I would say eventually getting local produce is more of a goal. We weren't able to find many local produce vendors to attend our farmers market, because there are so many farmers markets in Montana...that there just wasn't a lot of interest in participating in a brand new one. But if we can grow ours I think there is potential to get a local produce vendor."

The vision of a farmer's market in Lincoln began to take shape about a year ago as members of the Envision Lincoln group met to discuss the town's future, and it was realized due to the efforts of members of the Health and Wellness team formed during those meetings.

Although team members Jordan, Good, Lisa and Ron Gibson, Sue Lattin, Susie Gehring, Lisa Smith and Laurie Richards were instrumental in getting the market up and running, Good said the idea came from the community

"We sent a survey around to the community asking them basic questions like 'what do you like about Lincoln,' and 'what other activities would you like to see,' and people suggested a farmer's market," she said. "They said there was a need for more family events and a need for more fresh local produce, baked goods, things like that. It was mentioned in the survey many times, so that's kind of where the whole idea came from. It was something that other people had discussed...but it was kind of a bigger job than anyone wanted to tackle by themselves."

Good said the market will be advertised in the BVD, with logos and banners created by Lincoln High School students in Laura Bullis's Graphic Design class.

Organizers encourage locals and visitors alike to not only visit the market, but bring chairs and coolers and stay a while to relax in a beautiful setting, sample healthy wares and enjoy live entertainment. For more information visit and like the "Lincoln Farmer's Market" facebook page. To become a vendor, e-mail [email protected] or call Vendor Coordinator Lisa Gibson at 406-465-8348.