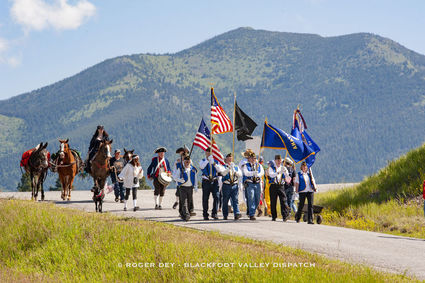 The Lincoln American Legion Post 9 Honor Guard leads the parade into Ovando from the parking lot of Trixi's Saloon.

Everybody loves a parade

When New Zealanders Andrew and Diane Scott rode into Ovando July 3, they didn't know they'd be "international ambassadors" in a parade celebrating American Independence the next day.

Kathy Schoendoerfer, Ovando's de facto ambassador for cyclists, said they had planned to leave on the morning of the Fourth, but were convinced to stick around for the towns annual Independ...