Another new fire emerges in the Flesher area 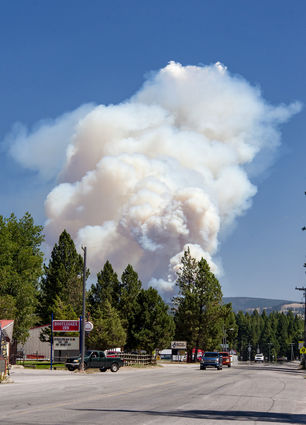 The plume from the Horseflly Fire seen from downtown Lincoln at about 3 p.m. Monday.

LINCOLN Aug, 5, 2019 - A new column of smoke visible from downtown Lincoln is the result of a new fire about a mile west of the Black Diamond Fire near Flesher Pass.

The Stonewall Lookout first picked up the new fire, called the Horsefly Fire this afternoon. Crews were dispatched to it immediatley, but Lincoln District Ranger Michael Stansberry told the BVD it grew quickly, before suppression actions could be taken.

There are currently Hot Shot crews and air assets assigned to the new blaze. Stansberry told the BVD at about 2:45 p.m. that he did not have size estimate yet. He said there are no structures threatened and the composition of the fire is very similar to the Black Diamond Fire.

Stansberry said it's presently unclear if the Horsefly Fire is the result of spotting from the Black Diamond Fire or from a lightning strike that smoldered for a couple days before warm, dry weather allowed it to gain enough energy to take off.

Suppression work continues both the Black Diamond Fire, which stands at about 30 acres, and the Nevada Creek Fire, which is at about 55 acres. Both fires are burning in areas of heavy dead and down and standing beetle kill.