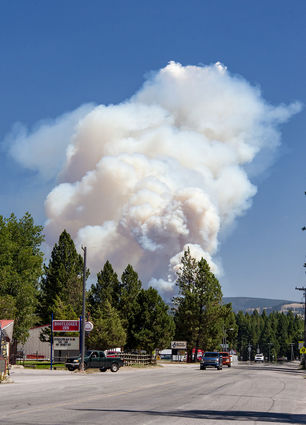 A plume of smoke from the Horsefly Fire rises over the hills east of Lincoln Monday afternoon as the fire gathered strength and began to grow.

The smoke plume that rose over the mountains east of Lincoln Monday seemed like a rerun as the Horsefly Fire erupted to life only about a mile west of the Black Diamond Fire that reared up near Flesher Pass Friday, Aug. 2.

The Horsefly Fire saw bucket drops almost immediately after it was reported, while it was still quite small, Fire Information Officer Tammy Shroyer told the BVD. Nevertheless...