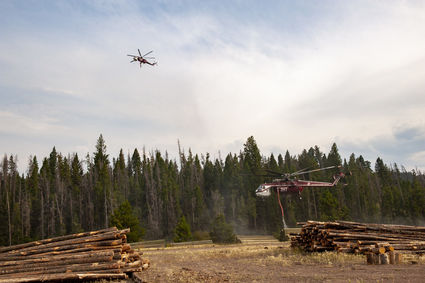 One Sikorsky S-64 Skycrane lifts off from the pond behind Bouma Post Yard after filling its tank as a second Skycrane waits above to fill up. The helicopters were busy making round trips between the Bouma ponds and the Horsefly Fire Thursday Aug. 8.

The cooling trend that started late last week also allowed Lewis and Clark County Sheriff Leo Dutton to lift an evacuation order for the Flesher Acres area that had been in place since Aug. 6.

After consulting with Almas and his Incident Management Team, Canyon Creek Volunteer Fire Chief Sam Stigman and other cooperating agencies, Dutton announced the decision at Friday's public meeting on the fire at the Canyon Creek Fire Station, but cautioned that the fire, which had grown to 1350 acres, was still burning.

Although the evacuation has been lifted, Highway 279 remains closed to bicycle traffic due to the continued volume fire-related traffic in the Flesher Pass area.

"While it is in a condition to allow you to return home, if the situation changes, re-evacuations or more evacuations could occur," Dutton said as part of his statement in a news release on the decision. "We ask people to stay vigilant and safe and appreciate your understanding and cooperation."

Fortunately for residents of the area, the cooler weather Thursday and Friday was a precursor to a series of storms that moved through the area over the weekend and brought significant moisture to the area, further helping fire crews corral the fires.

Crews took advantage of the reduced fire behavior and clear skies through most of the day Saturday to finish a fireline on the fires western edge and to continue mop up efforts on the southern edge of the fire.

According to the Aug. 12 fire update, thunderstorms that rolled into the area Saturday evening through Sunday dropped more than half an inch of rain on the Horsefly fire area, but also brought wind and lighting hazards that limited the amount of time crews could spend on the fire.

Nevertheless, the work over the weekend increased containment of the Horsefly Fire from 10 percent on Friday up to 55 percent by Tuesday. Cloud covered throughout the day Monday helped keep fuel moistures high as fire crews patrolled the containment line, worked on mop up and improved fire lines. 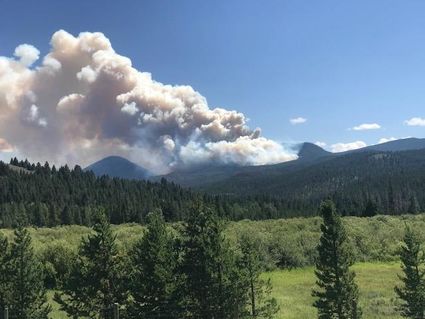 A Forest Service photo shows the Horsefly Fire Tuesday afternoon, Aug. 6 as it grew from about 500 acres to nearly 1300 acres.

The weather also benefitted suppression efforts on the Nevada Creek Fire southwest of Lincoln. The fire has held steady at 55-57 acres since Aug. 4, while crews worked to construct containment lines in steep terrain littered with both down and standing dead beetle-killed trees.

Last week crews made good progress on containment of the fire, reaching 75 percent containment by Aug. 8. Over the weekend crews continued mop up, secured the fire line and began removing the miles of hose that were used to fight the fire.

By Monday evening, the Nevada Creek Fire was 100 percent contained.

As the weather dries out this week, there is a chance for increased activity within the perimeters of both fires, but no growth is expected on either of the fires.