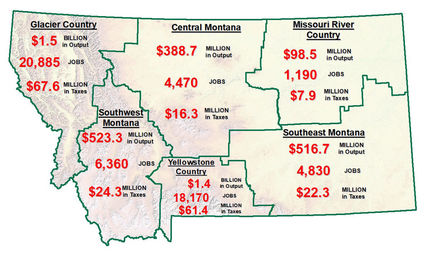 MISSOULA – Nonresident travelers spent $3.58 billion throughout Montana in 2018, according to an annual report published by the University of Montana's Institute for Tourism and Recreation Research. This is a 10.4 percent increase from the previous year's estimate.

"We see this as a big plus for Montana since our numbers indicate that visitation was relatively flat in 2018, but spending was up," said ITRR Director Norma Nickerson.

Analysis of each of Montana's six travel regions and 14 of the counties with the highest nonresident spending show that visitation and spending are widespread throughout the state and that all regions benefit. The institute calculates spending using an average of 2017 and 2018 nonresident data.

"Nonresidents bring in new money to Montana that helps the overall economy," Nickerson said. "While it is beneficial for the entire state, we have to recognize that Glacier and Yellowstone national parks are a big draw for visitors. Without those iconic parks bringing recognition to Montana, our economy would not be bolstered nearly as much."

Glacier Country in northwest Montana received over $1.21 billion in spending by nonresident travelers, which equates to 34 percent of all spending in the state. This travel spending supported a total of $1.53 billion of economic activity and almost 20,900 jobs, along with over $535 million in associated labor income.

In south-central Montana's Yellowstone Country, travel spending by nonresidents totaled nearly $1.1 billion, which was 30 percent of the state total. This spending supported about $1.39 billion of economic activity. Likewise, over 18,150 jobs and nearly $490 million in labor income can be attributed to this spending.

Gallatin County received more than $814 million in nonresident spending, followed by Flathead County ($614 million), Missoula County ($307 million) and Yellowstone County ($270 million). This spending contributes to jobs and other economic activity at the local county level, as well as rippling throughout the state.

"Visitors don't tell us why they are spending more, but when the economy is doing well, travelers have more discretionary money to spend in Montana," Nickerson said. "We are also seeing more spending on experiences such as guided trips rather than items to take home. Experiences tend to cost more."

The full report, including estimates of the economic contribution of nonresident travelers in the other four Montana travel regions, along with county-level estimates, is available on the ITRR website at https://scholarworks.umt.edu/itrr_pubs/391/.

All information and reports published by ITRR are available online at http://www.itrr.umt.edu.