The seven varsity players of the Lincoln Lynx football team are getting a lot of experience in the school of courage these days, facing down teams with twice as many players, week in and week out.

Standing across from the numerous Sheridan Panthers Thursday night, Oct. 3, the sturdy Lynx were ready to rumble even though only six Lincoln men were dressed out because Noah Belcher was still nursing an injured knee. 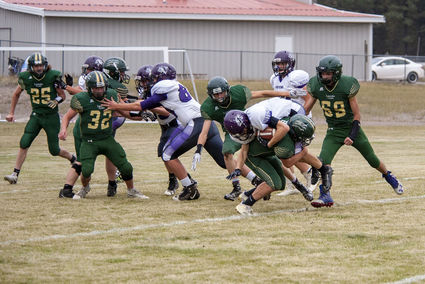 Nathan Brown executes one of his signature tackles to take down a Sheridan receiver.

Fighting through the pain of recent injuries, Senior Nathan Brown scored twice. Joey Wiederhold and senior Ryan Greenwood each scored once. The team made their two-point PAT kicks three times for a total Lincoln score of 30 vs. 42 for the Panthers, a loss on the scoreboard but not in the hearts of the fans who were excited to see the Lynx being so competitive.

Coach Travis Williams said his boys never gave up, were disciplined and played smart. Quarterback duties were shared by co-captains Brown and Greenwood, who both completed many successful passes.

Brad Howard was recognized by Williams for his outstanding effort in blocking. Allen Walker and Owen Whittenberg are fairly new to the sport, but "really stepped it up" and showed that they are quick studies who can give the team their maximum effort.

Saturday, Oct. 12 is the last regularly scheduled game, away at Lima. "We are pretty evenly matched with Lima and I'm expecting a good game up there," said Williams.