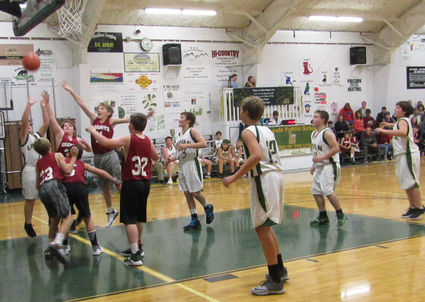 Logan Joyce watches his missed free throw as Andrew Brown jumps to reel in the ball. The Granite Prospectors played tough and came close to a win but went home empty handed 32 – 27.

Basketball rolled onto the Lincoln gym floor Saturday afternoon, Nov. 2 when the Granite County Prospectors tramped in for a two game match-up with the hometown Lincoln Lynx junior high boys.

The premier "A" game, featuring mostly 7th and 8th grade players, was a peek at the future varsity Lynx, a glimpse that gave fans a tantalizing preview of high times to come in the next few years. Pulling out a win after a last ditch surge by Granite, the Jr Hi Lynx posted their first win of the season, 32 - 27.

Three-sport athlete Logan "Rhino" Joyce had the hot hand of the game, posting 13 points and wowing the crowd with a vertical two foot leap when rebounding. Fellow 8th grader Wesson Dempster, from the athletic Dempster dynasty, added eight points to the team total, Andrew Brown racked up seven and Trever Tolan contributed two points. Roegun Dietz was called up from the "B" squad to give relief to the starters and helped out with two points as well.

The Lynx were leading most of the game until the last two minutes of the fourth quarter, when a series of Lincoln fouls let the Prospectors creep back in it, 28-27, but the day was saved by Joyce, pouring in a bucket, and Dempster, who sealed the deal with a free throw at the buzzer.

The low-scoring "B" game of the fifth and sixth graders was a 16 - 27 loss, but the two teams were actually evenly matched except for Granite shooter Jake Dauenhauer, who scored 16 points by himself and gave the Prospectors a lopsided tally. High point man for the Jr Hi Lynx "B" team was Roegun Dietz who put up ten points and used the outing as a warm-up for the next game on the "A" squad.

The next home game for the Jr Hi Lynx boys is Tuesday, Nov. 12, after school against the Drummond Trojans.