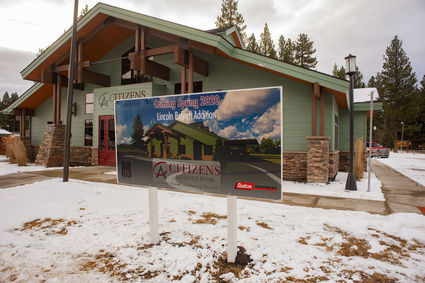 The Lincoln branch of Citizens Alliance Bank will nearly double in size this winter, with work set to begin in the next few days on addition to the south side of the current building.

"For those who don't know, we have no storage here, no additional office space," said Citizens Alliance Vice President and Lincoln Branch Manager Shayne Lindsay. He said most of the addition will be dedicated to offices, but about a third will be onsite storage space. The staff kitchen will also be enlarged.

"The lobby will stay the same. I believe there will be another entrance in the back, once we get those offices staffed," Lindsay said. "Teller wise, it's going to stay exactly as it is."

The expansion will also change the parking situation for the building. He said they haven't worked out the particulars on staff parking, but it shouldn't hurt customer parking on the west side of the building. "For the most part - from a customer parking standpoint - we're never full and we'll actually probably gain a couple customer spots."

The building's expansion doesn't mean an increase in the bank's workforce, either, although Lindsay hopes they will see some growth in the future.

He explained that when the new bank building was constructed in 2014, it was meeting the capacity for the business at that point, but didn't have any space for any additional needs.

"We do get quite a few inter-company visitors," Lindsay said. "They literally end up sitting at my table in here all day when they're here. It'll allow us office space for that, and hopefully for future expansion as well, from a personnel perspective."

Works should proceed through the winter, but Lindsay said the timeline for completion will be weather dependent.

Sletten Construction of Great Falls will be the primary contractor for the construction. They also won the contract for construction of a full-service Citizen's Alliance Bank branch in Great Falls. Though Lindsay submitted a list of local Lincoln contractors, he didn't know yet if any of them won any bids to work on the project.