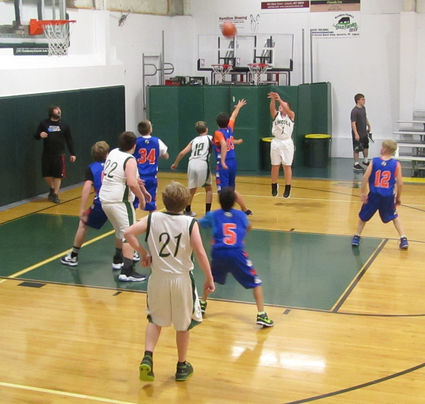 In the A-team game, a tired and emotional young Lynx squad gave their all to secure the 36 - 30 win over the more numerous Helena Rams.

Jumping out to a good start right from the first whistle, the Lynx were fired up to give their fans a good show for the final home contest. Logan "Rhino" Joyce was a dynamo threat to the Rams, stealing the ball three times, pulling down four rebounds and scoring six points. Tall tower Trever Tolan owned the space under the basket but also took a full component of fouls and had to sit out the last five minutes of the game. 'Big Man' Tolan tends to cause smaller opponents to trip over him!

Team leader Andrew Brown racked up 16 points which included four free throws. Consequently, the Rams zeroed in on Brown with double team coverage in the close fourth period. Coach Shane Brown called on sixth-grader Roegun Dietz to take over the scoring and Dietz ramped up his game, pouring the ball through the hoop. An exhausted Dietz finished with twelve points, one rebound and one acrobatic flying blocked shot.

The surprise of the night was fifth-grader Asa Lattin who had played the whole B-team game. He wiped the sweat off his face and joined the A-team for an energetic combo of steals, fast breaks and scoring. Noah Barnett, recovering from the stomach flu, added a formidable defense, drawing fouls and giving the offensive Lynx an open lane for scoring.

The B-team game of the fifth and sixth graders, with one fourth-grade player, was a loss for the Lynx. The Helena Ram's coach put in his older players for most of this contest, leaving the young Lynx at a skill and age disadvantage.

Life isn't always fair, but the Lincoln B-team played with poise and energy, running their plays and learning the ropes.