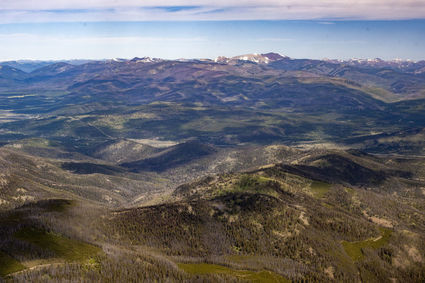 The Hogum/Humbug project is aimed at hazard fuels reduction on fewer than 3000 acres and is being developed using a categorical exclusion for wildfire resilience under the Healthy Forest Restoration Act.

"We know the condition of the fuels and the forest. I think it behooves us to reach out and put together a good project, especially in that area, knowing the past fire history," Lincoln District Ranger Michael Stansberry said.

The open house will give area residents the chance to gain an understanding of the project's goals, to get an understanding of the limits the categorical exclusion puts on it and to talk about opportunities for restoration work in the area. It will also provide an opportunity for area residents to learn more about the status of the Stonewall and Willow Creek vegetation projects.

Stansberry said the Hogum/Humbug project will be carried out to prioritize work in the Wildland Urban Interface and will also give them opportunities to address hazard fuels buildup in the zones surrounding the WUI.

"The rural fire districts and the counties help define where that wild land urban interface is, and from that we will work to create those opportunities," he said.

A 2020 update to the Tri-county Regional Community Wildfire Protection Plan covering Lewis and Clark, Broadwater and Jefferson Counties is currently in draft form. It defines the local WUI and provides the foundation for wildfire mitigations strategies around communities in the region. The draft plan, which should go into effect well before the Hogum/Humbug project gets underway, updates the 2015 plan to reflect recent changes to forest conditions

The Hogum/Humbug project will also serve as an introduction to the Northern Region's interdisciplinary "strike team" led by Dan Bliley, which is helping the district develop the project.

Stansberry explained that the Helena-Lewis and Clark National Forest has its own interdisciplinary teams that helps walk ranger districts through the National Environmental Policy Act process for projects like this, but the number of projects on the HLNF- as well as the litigation associated with several of them – have them stretched thin. As a result, Forest Supervisor Bill Avey had the idea to work with the Northern Region strike team on the Hogum/Humbug project. The team, assigned to the regional office in Missoula, also works with the Beaverhead-Deerlodge and Custer-Gallatin National forests and the Dakota Prairie Grasslands on similar projects.

"We're focused on NEPA and we typically do timber and fuels reduction projects," Bliley said.

He said his team's make up is pretty close to one that the District would field itself and includes an aquatics specialist, a soils scientist, a silviculturist and a wildlife biologist, as well as a writer editor and capacity for a GIS and spatial analysis.

Although the Black Diamond and Horsefly fires threatened the Hogum Creek area last summer, Stansberry said they identified the Hogum/Humbug area in 2018 as one that could see restoration work under the Healthy Forest Restoration Act. Bliley pointed out the project area falls within the priority landscapes identified by Gov. Steve Bullock after passage of the 2014 Farm Bill.

"We recognize there are lots of areas in the district that need treatment," Stansberry said,

Given the fact both the other restoration projects on the Lincoln Ranger District - Stonewall and Willow Creek - have been stalled through litigation, Stansberry understands there may be some skepticism surrounding the development of another project.

"I know I'll get questions on our projects and the litigation aspect of why we would put through another project when were so far behind on some of the projects we've already received litigation on," he said. "Simply, these are good projects; the right work at the right time. There's an expectation of us to do our best, despite the litigation, to put together good projects that do good work on the ground."

If all goes well, Stansberry said they hope to have a decision signed by the end of November, 2020. Work could begin as early as 2021, but is more likely to start in 2022. Stansberry said the projected timeline should include enough time to deal with any potential litigation.

In addition to the other, larger projects on the district, a small 68-acre restoration project in the Wasson Creek area is moving forward under an insect and disease categorical exclusion. Stansberry said the analysis for the area was mostly completed during the Willow Creek project analysis.

The Lincoln Ranger District recently received the opinion back from the US Fish Wildlife Service that clears the way for the small project to move ahead. Stansberry expects to sign the decision on it in January.

"It's small, but it's very focused and a good way to help the Lincoln economy by working through this type of restoration, and protecting the community from wildfire risk," he said. The project includes commercial thinning of overstocked forest stands and some prescribed burning to improve forest health.

"It seems to be something we can get implemented and get some really good restoration work done," Stansberry said at the meeting.

Stansberry noted that, except for roadside hazard tree removals, the Lincoln Ranger District hasn't been able to implement a restoration project since 1998.