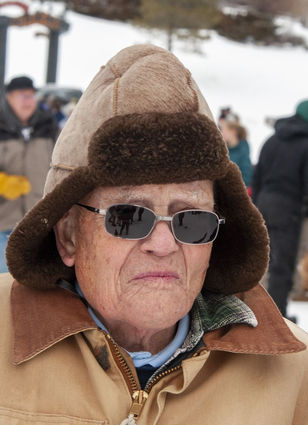 Dave Armstrong, now 99 years old, attended this year's Race to the Sky. A eteran of Camp Rimini, he helped develop the first Governors Cup Race and supported mushers in the Linocn and Ovando Area. His history with dog sledding extends beyond his service at camp Rimini to his childhood when, as a boy, he got a job at the Chinook Kennels in Wonalancet, New Hampshire, the kennel that originated the Chinook breed, based on a sled dog named Chinook that was part Greenland Husky, part "mastiff/St. Bernard type dog." "The dogs we collected throughout New England and Northern New York state were for Admiral Byrd to take to the Antarctic," he said. Armstrong's experience with the sturdy working dog breeds built for pulling loads over ungroomed ground created an affinity for the more historic sled dog breeds like Alaskan Malamutes, Siberian Huskies and Canadian Eskimo dogs

In its 35th year, Race to the Sky is the Lincoln area's longest running sled dog race, but a host of other races have taken place in and around Lincoln.

From the Lincoln Sled Dog Races that started in 1972 and were put on by the Lincoln Valley Chamber of Commerce to the LOST 170 held from 1978-85, to the Seeley Lake Race, Lincoln has been holding sled dog races for nearly half a century.