Life with 'the fam' 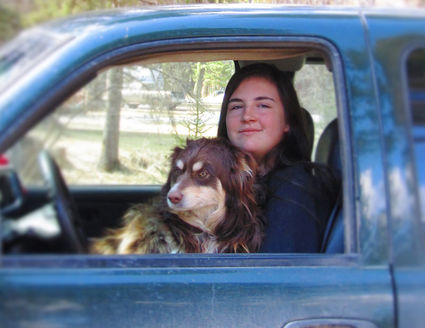 Lindsey Weisner and her dog ZuZu sit in her truck Monday afternoon. Weisner socially distances with her dog by going out for drives to take essential breaks.

At first blush, the shelter-in-place order sounded like every teenager's delightful dream: sleep in, hang out with friends on social media, not worry about acne or bad hair days.

But as the days and weeks dragged on, a new reality set in: the reality that life with the fam 24-7 was not such an odious ordeal after all. For most of the seven teenagers interviewed for this story, the biggest surprise was that movie nights, board games and doing chores with their families was more satisfying than they could have imagined four weeks ago.

The younger generation thrives on change and they've lived up to their billing by affirming that, at first, the new schedules were confusing and disorienting, but now they are in the groove and doing just fine.

When asked how they would react if the no-contact order was extended until the end of May, most agreed with sophomore Hayden Jennings who replied, "I'm already adjusted to the new routine. It's no big deal."

Most of the students said getting together with their class and teachers on Zoom social media was adequate for keeping up with their studies, but they said the lessons are somewhat more difficult to understand while they're home alone. A few students who need more intensive help are floundering without the structure and one-on-one help that they need. Seventh grade honor student Noah Barnett admitted to being "easily distracted" at home, with younger siblings running around, but said he finishes his daily assignments on the day they are due and he's keeping his grades up where they need to be.

The teens who have their drivers licenses have a "get out of the house" card that gives them an emotional release to go for a drive in their truck or take off into the hills on a four-wheeler.

Junior Lindsey Weisner and her dog ZuZu can be seen taking to the country roads now and then when the assignments are completed, but she also maintains a regular daily schedule, rising at 7 a.m.

"Keeping a regular schedule makes me feel better," she said.

"It's been kind of hard not spending time with my friends, but we text and call. You've got to make the best of it" he said philisophically. "I'm not tired of my family yet!"

Hailey Corrigan keeps in touch with her friends through social media, Facetime and playing games like Piano Tiles with them on their phones.

But all the students admitted they are anxious to get back to school.

"Social media is not as satisfying as face to face," said Hailey, even though the drama of teenage years can be frustrating.

Junior Joey Wiederhold has been spending his spare time putting a new transmission in his truck and working with his dad.

"School work has been more difficult without help from my teachers," he said and implied that this quarter may not be his best report card ever. "I haven't been doing the social distancing thing when I hang out with a friend," he said.

Sophomore Andrea LaManna said her parents are keeping her busy at home and she has not seen her friends since March 23rd. A new batch of baby ducklings at their home has kept them all smiling, however.

But if summer vacation rolls around and social contact is still restricted,"I'm going to be really upset," fumed Noah Barnett.

He won't be the only one.