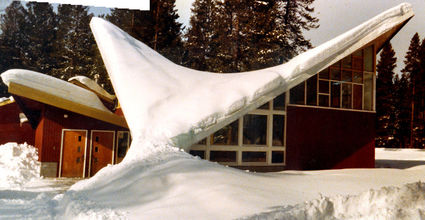 An undated image shows the Lincoln Community Methodist Church in winter, probably in the early 1970s before a later remodel covered the upper windows.

During the late summer of 1959 a peculiarly-shaped building rose on the east end of Lincoln's main street.

Sporting a design that looked like a square sheet pinned down on opposing corners, yet ready to take flight, Lincoln's Community Methodist Church soon became a landmark for travelers between Missoula and Great Falls.