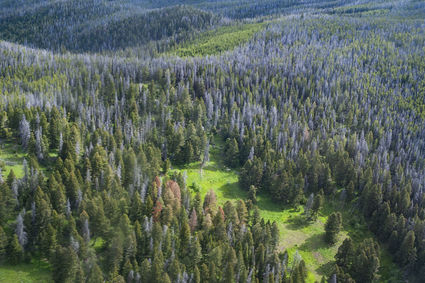 A 2019 aerial view of an area near the top of Dalton Mountain, looking northeast, shows the impact insect and disease has had on the area of the Willow Creek Vegetation Project.

A ruling in federal district court in Missoula last week rejected legal challenges to the Willow Creek Vegetation Project and cleared the way for treatment of 2,140 acres of timber affected by insects and disease in the Dalton Mountain area southwest of Lincoln.

In a June 3 decision, U.S. District Court Judge Donald W. Molloy rejected all six claims leveled against the project in a suit filed by the Alliance for Wild Rockies and the Native Ecosystems Council last June.

"We are pleased that our decisions and analyses were upheld and to be able to move forward. I want to acknowledge the importance of these projects and the amount of work our folks put into them," Helena-Lewis and Clark National Forest Supervisor Bill Avey said in a June 4 press release. "We want to thank our partners, including the Lincoln Restoration Committee, interested community members, and Montana Fish Wildlife and Parks for their continued support to improve wildlife habitat on the Willow Creek project."

The Lincoln Ranger District developed the Willow Creek Vegetation Project in 2017 using a categorical exclusion authorized by the 2014 Farm Bill that allows for treatment of up to 3000 acres to address forest health and fire mitigation issues related to insects and disease. The project area was widely impacted by Mountain Pine Beetle and local fire managers have been concerned about the danger a large wildfire in the area would pose to the community.

"The Willow Creek Vegetation Project is lined up right with those prevailing winds and the wildfires we've been seeing, so it's a really strategic place to get a good restoration project done," Lincoln District Ranger Michael Stansberry said at the June 5 Government Day listening session in Lincoln. He noted it's the first time in the five years he's been here that a court has decided in the Forest Service's favor. 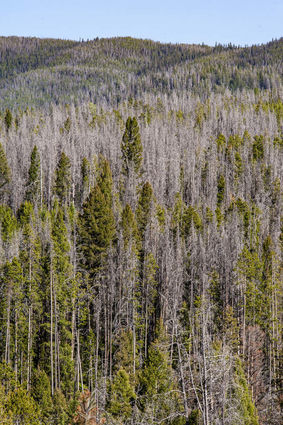 A 2019 image of a forest stand in the Dalton Mountain area shows the impact of insect and disease.

Stansberry said they are going to plan on implementing the project this summer.

While he couldn't provide an exact number of jobs the project will bring to the area, Stansberry estimated it would be several dozen, with up to 15 Forest Service personnel involved in implementation. Beyond the timber operations, the project will also include weed control and implementation of part of the Blackfoot Travel Plan.

While there have been small timber sales related to tree removal from readies or shaded fuel breaks created during wildfires, the timber sales associated with the project will be the first of their kind in more than 20 years on district land.

"1998 is the last time, from what I'm told, that we actually had a project in a practical fashion," Stansberry said.