Lack of mask use causes some concern about July 4th events 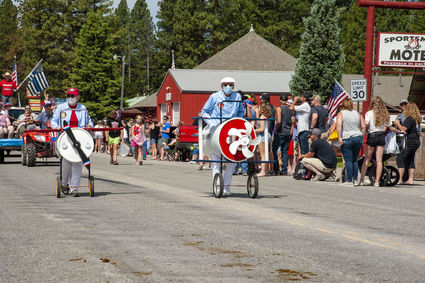 Karen and Bob Frank-Plumlee sport masks as they take part in the parade on behalf of the Lincoln Airport.

Last weekend, Lincoln became one of only a few communities in Montana to host an Independence Day parade, rodeo and fireworks this year, after most events around the state were canceled out of concern for COVID-19.

The influx of up to 2000 people to the community for the Independence Day parade and rodeo, Saturday July 4th, has prompted both praise, for moving ahead with celebrating the nations birth, and criticism for holding public events amid the COVID-19 pandemic.

Lincoln's service-based economy relies heavily on the Independence Day weekend to provide businesses with a critical economic boost that helps them weather the winter's financial doldrums.

After the recent COVID-19 restrictions in April and May took a toll on many of Lincoln's core businesses, and recent surges in coronavirus nationally, the question facing the Lincoln Valley Chamber of Commerce and Lincoln Rodeo Club echoed the national debate about balancing the risks of the disease against the risk of potential business closures.

Lewis and Clark County Commission Chair Susan Good Geise Geise told the BVD she had stressed the importance of the weekend to Lincoln's economy in a meeting earlier last week with public health and other elected officials, and got a lot of pushback from "prominent Lincoln residents" about why the county let the events go forward.

Lewis and Clark Public Health held a press conference Wednesday, July1, to urged anyone planning a large event to cancel it, or to limit attendance to 250 people. They also reiterated the importance of personal responsibility in wearing masks or face coverings around others, and in social distancing. Geise said at the press conference the weekend was the county's "last chance" to avoid possible mandates.

Geise wasn't in Lincoln for the weekend, but she admitted her disappointment at reports that very few people wore masks during the events in Lincoln, as well as by some "irresponsible" comments reportedly made at the rodeo. Nevertheless, she commended the event organizers for "doing their best to encourage sensible behavior."

"I believe the organizers themselves honored their commitment to make it as safe as possible," she said. "Was it a good idea? Time will tell. The community of Lincoln did what they said they were gonna do."

Locally, reactions to the weekend has been mixed, with many people who spoke to the BVD admitting the lack of masks was concerning, but pointing out groups were doing pretty good job of social distancing.

Like Geise, Aaron Birkholz, president of the Lincoln Volunteer Ambulance and owner of Coyote Coffee, said he was disappointed to see so few people wearing masks during the parade. He had recommended that people wear some sort of mask or face covering at the events.

During the height of Saturday's rodeo performance, Rodeo Club President Christ Lewenight, pointed to the open hill side that serves as a grandstand. It was covered with people who were mostly widely spaced in separate small groups, with a few larger clusters around the bench seating and the picnic tables. He said most of the groups who came together did a pretty good job of staying together and staying separate from one another.

"I think it went very well," he said.

During the rodeo, Lincoln Ambulance members took the temperatures of everyone who entered the rodeo grounds. None of the spectators had a fever, which is often evidence of a COVID-19 infection.

Teresa Garland took part in the parade on the Garland Girls float, she had some reservations about the parade and rodeo this year. As someone who has been part of main street business in Lincoln for 50 years, she understands how important the parade and rodeo are to Lincoln's economy. She also understands the Chamber of Commerce and Rodeo Club faced blow back whether they canceled the events or not. Nevertheless, she's thinks hosting the events this year may have been a little shortsighted, because if any COVID-19 cases are traced to Lincoln's events, some responsibility will fall on the organizations.

"This is a big moneymaker, but we've got a lot of people, we don't know who they are," she said. "What if this turns into a hot spot? The restaurants will have to go back to delivery; I'll have to close my doors. I hope that's not how it turns out."

Nyle Howsmon, President of the Lincoln Park Board, wasn't too concerned about the outdoor events contributing to the disease spread, but did think it was a good idea to extend the parade down to Sucker Creek Road, which the LVCC did this year to provide additional room for social distancing.

"I think it's more of an issue in the bars and stuff, where they're real close and talk loud to talk over the music," he said.

Elyssa and Dan Longson and their family steered clear of the parade this year, due to the number of people from out of the area, an in general, they're taking a 'better safe than sorry' approach to wearing masks.

Birkholz said it would probably be simpler for everyone if the government at all levels would be more coherent about of mask wearing, particularly when outdoors, where some studies show the spread of coronavirus is less likely. He thinks the mixed and inconsistent messaging from different government agencies in the past few months has left a lot of people either confused or just aggravated.

"They need to make it more clear," he said.