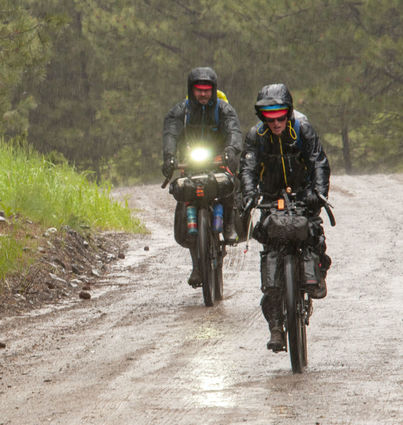 Folk musician Ben Weaver (left) and filmmaker Keenan Deplanks ride down Beaver Creek Road in a pouring rainstorm during the 2018 Tour Divide. Weaver performed more than 16 times along the route in 2018, during the filming of 'Music For Free,' which documented the journey. During this years COVID-19 pandemic, Great Divide cyclists and hikers of all kinds have been scarce.

Most summers, Lincoln welcomes hikers from the Continental Divide Trail as well as cyclists from the Great Divide Mountain Bike Route, many of them participating in the Tour Divide Race.

This year, COVID-related closures have affected both trails. According to the Continental Divide Trail Coalition, closures of the CDT in Montana include the sections running through the Blackfeet Nation and Glacier National Park. COVID-19 restrictions also closed the GDMBR's Canadian border crossing. As a result, Lincoln has seen fewer hikers and cyclists, a trend likely to continue through the summer.

Lincoln's annual Trail Days celebration, which highlights Lincoln's status as a CDT Gateway Community and promotes trails near Lincoln, has been canceled due to COVID-19 and event restriction concerns.

Laurie and Doug Richards at the Wheel Inn have also been building up services to support hikers and cyclists after their son took part in the Tour Divide Race a few years ago.

The Tour Divide began in 2008 but was effectively canceled this year due to COVID-19. It normally sees hundreds of riders each year, according to bikepacking.com. This year it had just two riders, Eric Sime and Jeff Cullum, doing Individual Time Trials. Sime, who came through Lincoln June 14, ended his effort June 30 in Salida, Colo.

The Tour Divide offers no registration fees and no prizes, and is fully self-supported, meaning riders don't have the advantage of staffed support or rest stations along the way. The race usually starts the second Friday in June and follows the full 2,745 miles of the Great Divide Mountain Bike Route. Mike Hall set the route record at 13 days, 22 hours, and 51 minutes in 2016.

The GDMBR runs from Banff, Alberta, through Montana, Wyoming, Colorado, and finishes up in Antelope Wells, New Mexico. The route was mapped out by the Adventure Cycling Association in 1998, and closely follows the Continental Divide. It is the longest continuous off-pavement bike route in the world.

The Tour Divide tracks riders using GPS. In normal years, it gives local supporters a way to see when racers are coming through town.

"We have the app and we'll be dot-watching. We'll go out and cheer them on," said Laurie Richards. She and her husband have created a bike support tent for racers, riders and hikers along both the GDMBR and the CDT. The support tent can be especially helpful for the self-supported Tour Divide racers.

"It's actually a bike and hike support. We have bike tools and the bike stand, bike wash. And a place for them to go. We have some chairs in there for them to get out of the weather if it's raining or too hot," Richards said. "It's very fun to talk to everybody from every country. This year, of course, not other countries. And it's not as busy as years past. But I want them to know that we encourage them and we'll do what we can for them." 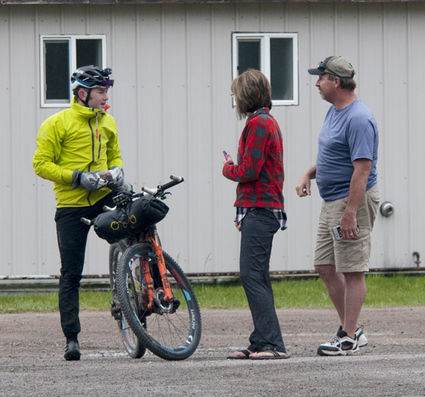 Laurie and Doug Richards speak with a Tour Divide rider in 2018.

The Richards are also working on a bike-lending service for hikers and visitors who are staying in town for a few days and might want to explore Lincoln but don't have transportation. They recently acquired an old bike rack from the school that they plan to put up, and they've already received some bikes to lend.

"We're in the process of looking for used bikes. We did get about five bikes donated, but they need quite a bit of work, and we need time to work on them, so if there's anybody who's a great bicycle mechanic, that would be a great help," said Richards. "I want them to just be out there at the disposal for anybody who wants to use them. Just on an honor system of bringing them back."

"It's so fun to be a part of it. I've had so many people say, "I love your town. I can't wait to grab my family and come back here." I think more and more, our town is friendly to the hikers and bikers, so then they can't wait to come back," Richards said.