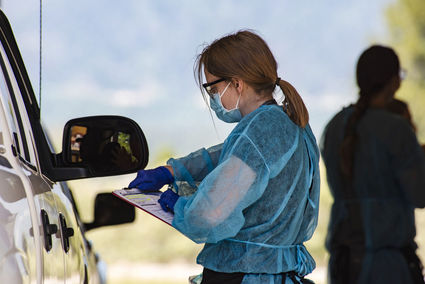 Natasha Peterson with PureView Healthcare talks to a person who opted for a COVID-19 test during the Lincoln drive through testing event July 15.

Jill Marie Steeley, the CEO of PureView, said the Lincoln event proved to be a slow one, and only drew 100 people who stopped to get tested.

The second testing event planned for Lincoln Aug. 12, as well as the Aug. 5 testing in Augusta, The July 22 testing in Craig and the Aug. 15 and Sept. 12 events in Helena have all been canceled because the lab processing the tests had received too many from Montana and were no longer able to process them in a timely manner.

"The state lab agreed to run the tests from Lincoln themselves, instead of sending them off," she said.

"On Monday I was told Quest Diagnostics will not be able to perform our sentinel surveillance testing for at least two to three weeks, until they can improve their capacity," he said.

"Over the past couple weeks, and as case numbers substantially spiked across the country, Quest, which is the reference laboratory out of Montana, where we've been sending the surveillance samples, has delayed further and further it's turnaround time."

Steeley said results from surveillance testing events had been taking seven to 10 days, but with the lab overwhelmed, they were told it could instead take from 10 to 14 days.

"If you can't get results back within 10-14 days it pretty much is pointless to test," Steeley said. "Most likely if you've been exposed, you're going to have symptoms within that window. If you get identified as a contact by the health department you get tested ... and you get told to quarantine for 14 days."

Bullock likewise said the delaying in getting results is of limited value. He said when they first started working with Quest two months ago, the turnaround time was 72 hours.

"I don't think any of the labs were prepared for something like this," Steeley said. "We've put a lot of effort into getting a lot of people tested, so it ended up being thousands, not just from PureView, (but) all over the state."

Bullock said from mid-June to mid-July Montana has done more than 55,000 tests.

On June 27, the American Clinical Laboratory Association, which represents 28 labs including Quest, released a statement warning that "the anticipated demand for COVID-19 testing over the coming weeks will likely exceed members' testing capacities," and that global demand for testing supplies is likely to increase in the coming months.

Steeley said PureView will continue to do COVID-19 testing but will limit it.

During the event, Steeley said by the overall low turnout seemed to be due to several factors.

"I think there's always that fear of what we don't want to know, because then what do we do?" she said. "I think for the most part, people just feel like it's an unnecessary exercise because it's not in their face. If you guys had a whole bunch of cases and it was scary there would probably be a bigger response." 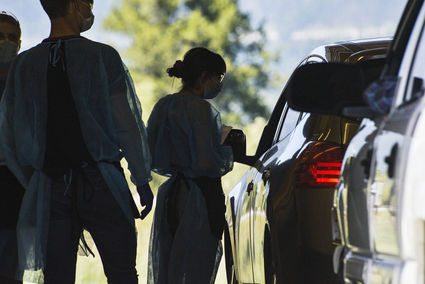 Members of the Pureview C-19 team conduct testing at the Lincoln Ambulance barn.

The reason for the surveillance testing here stemmed from both the recent public events and from the fact that Lincoln sees a lot of out-of-state travelers and tourists, Steeley said.

"It may not have been in your community, but it might be here now because you've got a lot of people coming in from hot spots. There were a lot of public gatherings on the Fourth of July," she said. "We're far enough out now that we would be able to see that with these tests coming back. In general, we just wanted to provide the service because you guys are an important community to us and you're a tourism attraction."

Although surveillance testing has been a part of the COVID-19 strategy, Steeley recommended sticking with the basics to prevent spread.

"I think the most important way of doing that is wearing the masks, washing hands, social distancing, not having big gatherings," she said.