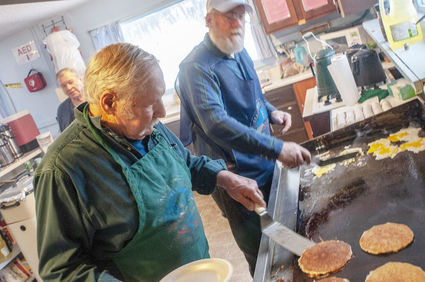 Bob Orr flips one of his famous sourdough pancakes during the Dec. 29, 2018 Ponderosa Snow Warriors Pancake Breakfast. Orr, who had been making the pancakes for the snow warriros breakfasts using the sme starter since the mid 70's, handed of f his spatula last year.

Longtime resident and Lincoln Telephone Company President Bob Orr has lived in Lincoln for the better part of 75 years.

An article from Gold Pans and Singletrees shares that Orr's parents also served as caretakers for the 7-Up Ranch properties.

"My dad was at that time logging," said Orr.